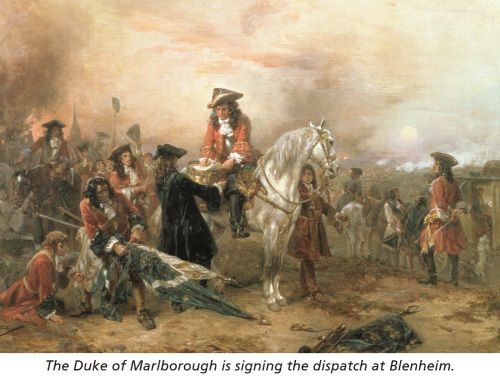 Recently, through the miracle of audio books, I have been freed to read (actually listen to, while driving children to school, cleaning kitchen etc.) books not immediately relevant to VDARE.com's mission. My current favorite: Marlborough: His Life And Times, by Winston S. Churchill.

Of course my opinion of the old rogue has changed enormously since I was a child in England in the 1950s: nevertheless, I completely agree with the peculiar neocon cult philosopher Leo Strauss' comment on hearing of Churchill's 1965 death:

Not a whit less important than his deeds and speeches are his writings, above all his Marlborough—the greatest historical work written in our century, an inexhaustible mine of political wisdom and understanding, which should be required reading for every student of political science.

I would merely add "for every student of literature." Churchill's grasp of language was simply extraordinary. Of course, it's a sorrow to us effete snobs that Donald Trump is more demotic. But, hey, we had Pat Buchanan and we didn't elect him.

John, Duke of Marlborough, Captain-General of the anti-French forces in the War of the Spanish Succession, is interesting for many reasons—not least in that he was a sort of proto-Robert E. Lee: his theory was that you attack the enemy's army (unprecedented in the stately maneuver warfare of the early 18th century) and utterly destroy it. Moreover, unlike Lee, Marlborough actually succeeded in doing this, at the battles of Blenheim, Ramillies, and Oudernarde.

But there are darker parallels. In that early modern era, Britain and other civilized societies were just beginning to solve the succession problem that had plagued antiquity and the Middle Ages, when rulers who did not die of natural causes were usually ultimately murdered, often along with all their children. Not many of Marlborough's generation were actually executed—although some were—but many were charged with treason or criminal corruption, including Marlborough himself before and after his ten-year campaign of brilliant military victories, and also the contemporary chief minister Robert Harley and future Prime Minister Robert Walpole, both of whom spent time imprisoned in the Tower of London. Prosecution was simply an occupational hazard of public life.

Now, again, America is moving back towards the criminalization of policy differences. (Back in 2005, Kevin Drum in Washington Monthly attributed this concept to me, citing one of my London Times columns, about Oliver North, although actually it was North himself who originated the phrase. Significantly, a commenter immediately complained that Politically Incorrect me had been mentioned in this—entirely technical—context at all. In retrospect, this was early evidence of America's emerging Totalitarian Left).

In fact, what has happened to Paul Manafort is worse then the criminalization of policy differences—it is the criminalization of personnel differences. Manafort was a political technician, not an ideologist. His brief role in the Trump campaign was reportedly due to his supposed ability to whip convention delegates. His criminal convictions, however, are the result of renewed intense scutiny of his activities before he joined the Trump campaign i.e. nothing whatever to do with the Russian collusion chimera. As one of Manafort's lawyers said: "But for a short stint as a campaign manager [for President Trump], I don't think we would be here today."  [Paul Manafort sentenced to a total of 7.5 years in prison: 'It is hard to overstate the number of lies', Kristine Phillips, Kevin Johnson and Brad Heath, USA Today, March 13, 2019]

Given the inordinate powers now enjoyed by U.S. prosecutors, this is not an edifying spectacle.

Nor is the Manhattan District Attorney's decision to indict Manafort again, despite the obvious appearance of double jeopardy, widely assumed to be an attempt to frustrate any Trump pardon. [Manafort charged in New York with mortgage fraud and other state crimes, by Aaron Katersky and Soo Rin Kim, ABCnews.com, May 13, 2019]

The obvious message: do not work for insurgents like Trump—or else.

This is a regression to a more primitive and brutal politics—ultimately a result of immigration-driven ethnic change.