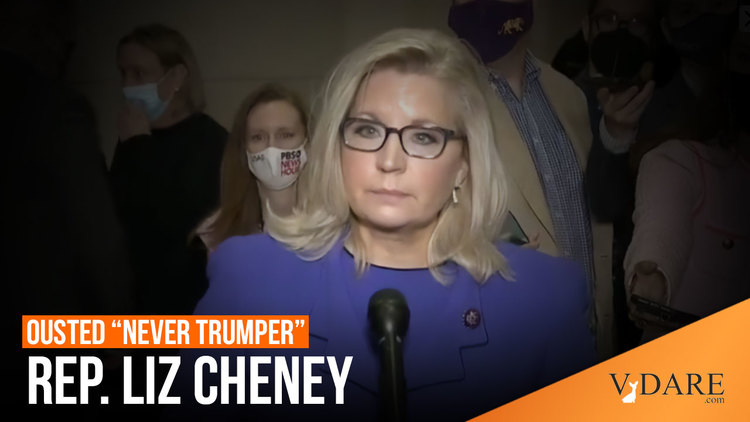 Previously: Is Liz Cheney’s Ouster A Victory For Immigration Patriotism?

The Republican House Caucus voted overwhelmingly to oust Wyoming Rep. Liz Cheney as its conference chair. It only took a few minutes for the caucus to do a voice vote to kick her out [House GOP ousts Trump critic Liz Cheney from top post, by Alan Fram and Kevin Freking, Associated Press, May 12, 2021].

Rep. Liz Cheney: "I will do everything I can to ensure that the former president never again gets anywhere near the Oval Office." https://t.co/bddD72hb0b pic.twitter.com/EykxkZpkl3

The vote to pick Cheney’s replacement is expected for Friday. The favorite to be the next conference chair is Elise Stefanik, a Trump-loving immigration booster. I covered the problems with her in my most recent column.

Whatever happens Friday, Cheney’s ouster is good news for immigration patriots. It signals that the invade the world/invite the world GOP of the George W. Bush years may be on its last legs. Over 100 former Republican officials threaten to leave the party unless it purges itself of Trumpism and exclusively caters to the donor class’s interests [Over 100 Republicans, including former officials, threaten to split from the G.O.P., by Zach Montague, New York Times, May 11, 2021]. We should hope these terrible critters leave the GOP. We do not want the consultant class that gave us “compassionate conservatism” to dictate party policy. We want America Firsters to transform the party into a vehicle to defend the Historic American Nation. People like Liz Cheney stand in the way of that.

Whoever replaces Cheney will be better for the long-term goal of making the GOP more like the Trump who won in 2016. But if the party wants to show it’s serious about putting America First, it won’t select Stefanik. There are much better options out there.

There is still time to derail Stefanik’s coronation. It’s up to the House Freedom Caucus and other conservatives to put forth a viable, America First candidate.