In recent days, several Somalis in Minnesota have been indicted on charges of promoting terrorism for recruiting young men for jihad in the homeland. This court action follows reports of a couple dozen USA-residing Somalis fighting for Allah in their home country. One, Shirwa Ahmed (a graduate of Roosevelt High School in Minneapolis), blew up himself and 29 others in Mogadishu.

Reporting from Minneapolis - Barely a block from the Mississippi River sits a neighborhood Mark Twain could not have imagined.

"When I came here as a refugee in 1995, there were just a few hundred Somalis, and we were very alone," said Adar Kahin, 48, who was a famous singer back home and now volunteers at a local community center.

"Now everyone is here," she said cheerfully. "It's like being back in Mogadishu. That's what we call it, Little Mogadishu."

This corner of Minneapolis — the de facto capital of the Somali diaspora in America — presents many faces: hope and renewal, despair and fear.

"Diaspora" is a trendy term for an immigrant community that keeps separate from the mainstream society in order to preserve its own customs. The word also implies a lack of choice, that immigrants were forced to come to America, which of course they weren't.

And when did anyone ask Americans whether they wanted a "Little Mogadishu" inserted into their midst? Citizens certainly would have rejected a nest of terrorists who are the ideological descendants of a thousand-year war against the west (starting with the Battle of Tours in 732). Even without the Islamist jihad aspect, Somalis are a primitive tribal people who need instruction about the use of lightswitches and how to boil water the modern way with a stove. Other cultural norms include polygamy, wife beating and FGM — practices which are illegal in this country. (For more on the cultural chasm, see Cliff Notes Assimilation for Somalis.)

But more than anything, particularly for the young, it is a place of transition and searching for identity.

"Keeping an identity in this situation is really hard," said Saeed Fahia, who arrived in 1997 and now heads a confederation of Somali organizations. "In Somali culture, all tradition is taught when you are 9 years old, and you learn all about your clan and sub-clan for 25 generations. There's no mechanism to learn that here, and no context."

Perhaps the clan-obsessed Somali society — plus its other cultural behaviors that are criminal — is not a good fit in America. Just a thought.

For the FBI, Little Mogadishu has become the center of an intense investigation into a recruiting network that sent young men to fight in Somalia for a radical Islamist group known as Shabab, or "the Youth."

Investigators say the poverty, grim gang wars and overpacked public housing towers produced one of the largest militant operations in the United States since the Sept. 11 terrorist attacks.

Even the MSM has noticed the gang carnage among Somali immigrants, for example CBS in this July piece: Rise of Somali Gangs Plagues Minneapolis. The article noted that 400-500 Somali males residing in the city were involved in gang activity according to a 2007 report.

A large cohort of young Somali gangsters who are alienated from American society would be good pickings for Islamic recruiters promising everything they feel is missing from their lives in America.

Outside the Brian Coyle Community Center, five young men who emigrated from Somalia as toddlers huddled in black hoodies under a cold, clammy fog that turned the day dull gray. They shared smokes and spoke of those who had joined the jihad, or holy war.

"Some of them felt America is the land of the devil," said Said Ali, who is 20, rail-thin and jobless. "They were losing their culture, their language and their religion. They've got family there. They feel at home."

Why does Washington continue to welcome people who hate this country? It is criminally naive (or treasonous) to do so. FDR didn't allow Nazi immigration in WWII, and today's government should similarly end Muslim immigration for the duration. If national security has any value at all in Obama's post-national America...

Below, Somali males imbibe beverages in a Little Mogadishu (aka Minneapolis) coffee shop. 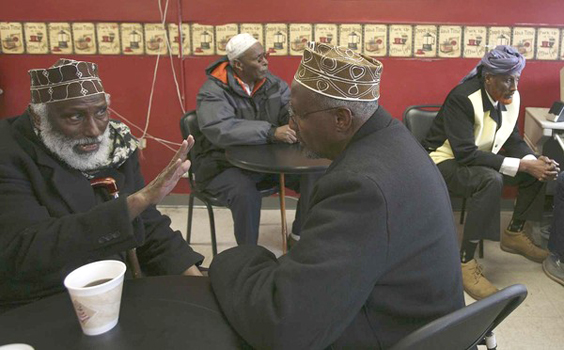