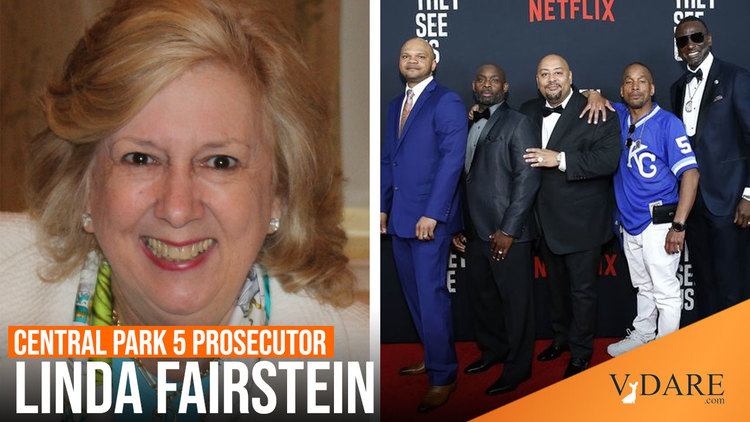 Linda Fairstein Suit Against Netflix For Lies About The Prosecution Of The (Guilty!) Central Park Five

Earlier by John Derbyshire: While We Can Still Say It—THE CENTRAL PARK FIVE COMMITTED A GANG RAPE AND LINDA FAIRSTEIN PROVED IT IN COURT!!!
At the Volokh Conspiracy, First Amendment specialist law professor Eugene Volokh reports on a libel suit that's being allowed to go forward.
New York prosecutor Linda Fairstein, who got convictions on five of the people involved in the Central Park Jogger gang rape, is suing Netflix over her depiction in a docudrama [Central Park Jogger Case Prosecutor's Libel Lawsuit Against Netflix (Over "When They See Us") Can Go Forward as to Some Claims, Eugene Volokh,  August 10, 2021].
The judge, allowing the case to go forward, has said:

Fairstein has plausibly alleged a claim of defamation as to five scenes. These scenes depict Fairstein as orchestrating acts of misconduct, including the withholding of evidence, the existence of "tapes" showing that she "coerced" confessions from the Five, an instruction not to use "kid gloves" when questioning suspects, and directing a racially discriminatory police roundup of young men in Harlem. The average viewer could conclude that these scenes have a basis in fact and do not merely reflect the creators' opinions about controversial historical events. Separately, the Court concludes that defendants have not demonstrated the substantial truth of a scene depicting Fairstein's creation of an attack timeline because they rely on public remarks that are inconsistent with her depiction in the scene.

Further, there's a part about "docudramas," and the fact that Ava DuVernay, who supported the black gang-rapists, was specificially targeting the white prosecutors:

Fairstein asserts that defendants marketed and promoted "When They See Us" as a fact-based version of the events surrounding the Five. Netflix social media posts and advertising trailers described "When They See Us" as "[t]he truth you haven't heard" and "based on the true story of the Central Park Five." The Complaint quotes multiple statements made by DuVernay on social media, in interviews and in public appearances that characterized "When They See Us" as fact-based, referring to it as "the real story of The Central Park 5" and "100% real." The Complaint also quotes from public statements that DuVernay specifically made about Fairstein, including a remark in an interview with Oprah Winfrey where she stated, "And so the goal of this—okay, Linda Fairstein, okay Elizabeth Lederer, okay, all of these people on this particular case we need to be held accountable."

Locke made similar public statements, such as, "[a] piece of American History gets rewritten with the truth," and "You can't argue with facts." …

Given the full content and context of the series at issue, the Court declines to conclude that the average viewer would assume that "When They See Us" is "more fiction than fact," a proposition that the defendants do not advance. But it is reasonable to expect that the average viewer of "When They See Us" would understand that dialogue in the dramatization is not a verbatim recounting of the real-life participants and is intended to capture the essence of their words and deeds.

Of course, the judgement takes as fact the "exoneration" of the defendants, and assumes the only question here is "How racist is Linda Fairstein?"
The thing is, this exoneration is entirely bogus.  During the 2016 Trump Campaign, when Trump was being attacked for saying the Five were guilty, Patrick Cleburne wrote here that

I have a personal input into this controversy. Some years later, long after the shock had faded, I was at a private dinner in New York where Linda Fairstein was present. Fairstein ran the prosecution of this case. She was already launched in her novelist career. She remarked, without any particular prompting, that the doctors who dealt with the victim judged that she had been raped by at least 30 men. In telling us this, of course, Fairstein was admitting grievous failure as a prosecutor since only 5 were convicted.

After the fact, when DNA testing became more useful, a lowlife whose DNA was found in the woman was induced to take entire responsibility for the crime.

Cleburne mentioned Sotomayor Supporter Robert Morgenthau And His Regime Of Racialized “Justice” In Manhattan  published here in 2009,  and “It Was Fun”—Robert K. Tanenbaum vs. The Central Park Five, 25 Years Later, from 2014.
The actual crime was a long time ago: in a previous  MSM existence, VDARE.com editor Peter Brimelow wrote it up as Beasts In The Park, The Times (London), April 29, 1989.
See also :