Lifehacker On Spitting, And Spitting On Chinese Stereotypes

See, earlier: The “China Virus” Came From China And Chinese People. AND IT'S OK TO SAY SO

On Lifehacker.com, one writer is inveighing against spitting on the sidewalk, which he says is prevalent in modern America:

I know Dr. Fauci hasn’t issued a national PSA about the dangers of spitting with impunity, but you should still know that it’s obscenely reckless given the currently rampaging state of the pandemic. It must bear repeating that there’s a worldwide pestilence that’s hit the U.S. harder than any other country; we’ve had over 300,000 people die of COVID-19 in under a year, and the grim tally really sees little sign of abating in the immediate future. So why the hell are you spitting on the ground, where people walk?

COVID is transmitted in a number of ways, and yes, the saliva you’re spewing onto the ground is one of the vehicles by which this virus spreads. But wait, it can spread other diseases, too!

He's right, of course. The comments are full of people who (a) don't believe that diseased phlegm on the sidewalk is a threat, (b) are absolutely furious at the idea of swallowing their own phlegm or spit, or (c) deny that this is at all common.

Briefly, this should not be a new idea: spitting on the sidewalk was forbidden by law in many cities in the 1920s to prevent the spread of TB, which is returning to America with immigrants from less sanitary lands:

I say "from less sanitary lands"—the reason you probably couldn't go out shopping or to a Christmas party today is because China is very much less sanitary than modern America, but people don't want to hear that, as witness this exchange between Lifehacker commenters: 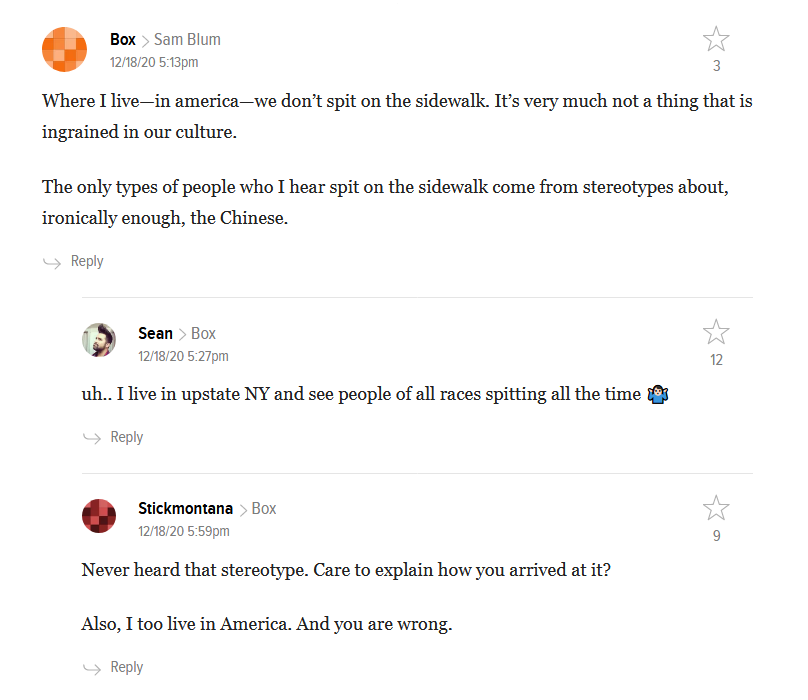 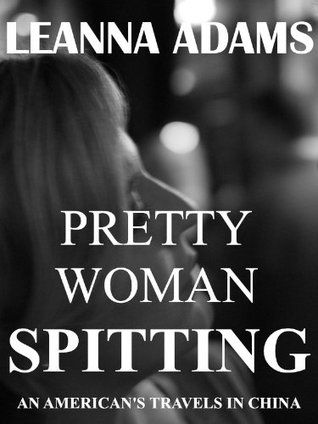 Well, maybe he got from things like the 2012 book Pretty Woman Spitting, by Leanne Adams.

You can watch Leanne Adams talk about experiencing another culture, the good and the bad.

The spitting—massive public expectoration, even by by well-dressed, stylish and pretty Chinese women—is part of the bad.

Maybe the guy who had "arrived at" a stereotupe the other fellow had never heard of had seen this clip, of a Chinese visitor to America spitting loudly and repeatedly, and blaming it on the Chicago weather.

Maybe stereotype believing guy had lived in or near his local Chinatown. Maybe, like John Derbyshire, he had lived in China.

During a 2016 trip to Hong Kong, Derb noted that the locals complained that Chinese Mainlanders spit publicly and he added

In regard to spitting, Hong Kongers seem to have been totally cured of the habit. Forty-five years ago, when I was busily memorizing all the Chinese characters my eye fell upon, the signs on the Star Ferry from Kowloon to Hong Kong island begged 請勿吐痰—"Please don't spit"—to not much effect that I could see. The Star Ferry is still sailing—with some of the same boats, to judge by their physical condition — but the signs are long gone.

On a more recent trip to China, Derbyshire noted that the Chinese Communist government is discouraging spitting on the streets:

China's leaders have become acutely aware that Westerners regard some of their long-established social customs—spitting in the street, promiscuous smoking, fighting scrimmages to get on trains—as uncouth. They want their citizens to clean up their acts, as a matter of national pride.

It's working, at any rate in the big cities.

And the reason it's working is that the Chinese government can tell Chinese people not to follow the well-known Chinese custom of spitting on the streets without worrying about whether of not they're being racist. Americans, apparently, can't.

This, by the way, like the unsanitary Chinese habit of eating live bats, etc., in the “wet markets” of Wuhan, is a cultural rather than racial characteristic, and thus can be changed.

Immigrants And DiseaseDiversity Is StrengthCoronavirus And Race
<< Previous
Next >>
LATEST