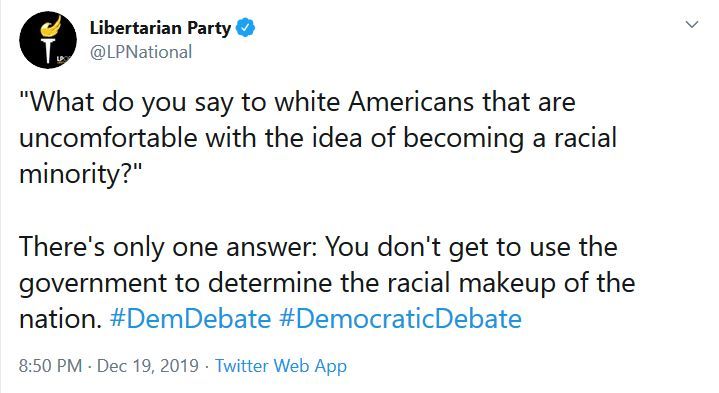 The Libertarian Party is officially off the rails. Here is a tweet from LPHQ on December 19, the night of the latest Democrat debate:

"What do you say to white Americans that are uncomfortable with the idea of becoming a racial minority?"

There's only one answer: You don't get to use the government to determine the racial makeup of the nation. #DemDebate #DemocraticDebate

The answer to this, of course, is that racial minorities don’t get to use the government to elect a new people to replace legacy Americans, but anyway, the thread after the initial post shows that even some libertarians, or at least those who follow the LP’s Twitter feed, understand that importing a bazillion nonwhites from the Third World isn’t likely to usher in libertarian nirvana.

“A small consolation is the thought that when America is dominated by ppl of non European descent, libertarianism will be even deader than it is now,” one follower wrote. “Won't be especially friendly for African Americans or Jewish Americans either. When that becomes obvious, it’ll be too late.”

Wrote another, “Which is why the Libertarian party has it's party conventions on hotel bathrooms.”

Not quite hotel bathrooms, but close enough.

Libertarians win only the rare election because most Americans intuitively know that libertarianism is nuts, as I’ve written before.

Now, amusingly, they hope to end any hope of winning even that rare election by importing a bazillion nonwhites, who will swamp the tiny number of Americans who support libertarians. Those nonwhite, non-libertarian voters will cast ballots for socialism, gun control, and all manner of nanny-state subsidies and activities.

Yet one more comment that explains how daft libertarians are: “I don't care if a majority of voters are left handed Ethiopian Hindus as long as the scope of government is limited such that they can't impact my liberty.”

I guess that writer doesn't understand that left-handed Ethiopian Hindus won't much care about his liberty once they get the vote.