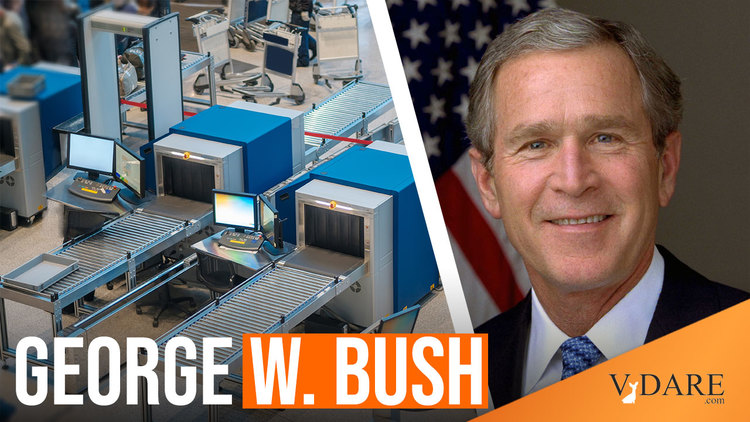 Lest We Forget: "Bush Had Called For Laxer Airport Security" And "Political Correctness Saved Mohammed Atta (And Doomed Thousands)"

On Oct. 11, 2000, during the second presidential debate, the Republican candidate attacked two anti-terrorist policies that had long irritated Arab citizens of the U.S.

At present [i.e., the evening of 9/11], of course, there is no definite evidence that Arabs or Muslims were involved in today’s terrorist assaults. Many incorrectly assumed after the 1995 Oklahoma City bombing that Middle Easterners were involved. Nor is there direct evidence that Bush’s attack on airline safety procedures made the four simultaneous hijackings easier to pull off.

Bush said during the nationally televised debate, “Arab-Americans are racially profiled in what’s called secret evidence. People are stopped, and we got to do something about that.” Then-Governor Bush went on, “My friend, Sen. Spence Abraham [the Arab-American Republic Senator from Michigan], is pushing a law to make sure that, you know, Arab-Americans are treated with respect. So racial profiling isn’t just an issue at the local police forces. It’s an issue throughout our society. And as we become a diverse society, we’re going to have to deal with it more and more.”

Bush’s plug for Senator Abraham was intended to help Abraham in close re-election battle, which he ultimately lost. (Abraham is now the Bush Administration’s Secretary of Energy.) More important personally to Bush was the swing state of Michigan’s 18 electoral votes, which Al Gore eventually won narrowly. Arab-Americans, centered in Dearborn and Flint, make up about four percent of the population of Michigan, the most of any state.

In the debate, Bush conflated two separate policies that Arab-Americans and Muslim-Americans felt discriminate against them: the heightened suspicions faced by Middle Eastern-looking travelers at airport security checkpoints and the government’s use of “secret evidence” in immigration hearings of suspected terrorists. Yet, despite Bush’s confusion, Arab-Americans appreciated his gesture. Four days after the debate, the Arab-American Political Action Committee endorsed Bush.

The day after Bush’s remarks, 17 American sailors died in a terrorist attack in the Arab nation of Yemen. The bombing of the U.S.S. Cole, however, did not stop Vice President Al Gore from echoing Bush’s calls to end these two anti-terrorist techniques in a meeting with Arab-American leaders on October 14, 2000.

According to a spokesperson for a leading Arab-American organization, people of Arab descent are stopped and searched at airports more often than many other ethnic groups. Some refer to this as Flying While Arab or Flying While Muslim. These terms are intended as plays on the popular phrase “Driving While Black,” which is widely used to criticize police departments for stopping more black than white motorists.

This year, both Bush and his Attorney General John Ashcroft have called for an end to racial profiling.

The Federal Aviation Administration provides airline and airport personnel with the Computer-Assisted Passenger Prescreening system to help them identify suspicious travelers. It relies on a secret profile of the characteristics of typical hijackers and terrorists.

Bush’s Transportation Secretary Norman Mineta has said that “the security procedures are not based on the race, ethnicity, religion or gender of passengers” Yet, the system is widely believed to use other information – such as whether the traveler is going to or coming from the Middle East – that tends to “disparately impact” Arab and Muslims.

None of the ethnic rights groups, however, has offered any data to dispute the widespread assumption that in the three decades since the Palestine Liberation Organization invented skyjacking, a disproportionate number of hijackers and plane bombers have had Middle Eastern ties.

Nonetheless, the Bush Administration publicly agrees with the civil rights organizations that even a nonracial airport profiling system that had merely a disparate impact on Arabs and Muslims would be objectionable. Secretary Mineta said, “We also want to assure that in practice, the system does not disproportionately select members of any particular minority group.” Of course, if Arabs and Muslims are disproportionately more likely to hijack airliners, and the profiling system does not end up disproportionately targeting them, then the system wouldn’t work very well at preventing hijackings.

To ensure that no disparate impact is occurring, the Bush Administration carried out in June a three-week study, first planned by the Clinton Administration, of whether or not profiling at the Detroit airport disparately impacts Arabs.

The results of the study have not been released. Nor is it known whether the secret profiles have been relaxed – they are kept secret in order to keep hijackers guessing.

Besides airport profiling, Arab-American activists long demanded the repeal of the “secret evidence” section of the 1996 Anti-Terrorism Act. To prevent terrorist gangs from murdering U.S. government secret informants, this law allows the government to provide evidence from unidentified moles in the immigration hearings of foreigners suspected of terrorist links. The government has deported or detained a number of Arabs hoping to immigrate to the U.S. due to testimony by witnesses they were never allowed to confront.

As the practice has come under increasing attack, the number of Arab immigrants detained on secret evidence has dropped sharply. Hussein Ibish of the American Arab Anti-discrimination Committee told UPI in June, “Two years ago there were 25 in prison,” he said. “Now we’re down to only one.”

Five years later I followed up on what we’d since learned about anti-discrimination political correctness vs. airport security:

It was not until 2005 that Michael Tuohey surfaced. He was the veteran U.S. Air ticket agent in Portland, ME who checked in Mohammed Atta, the leader of the 19 9/11 terrorists, and a companion on the first leg of their trip that ended in the World Trade Center. Tuohey was interviewed by Oprah Winfrey:

Michael Tuohey was going to work like he had for 37 years, but little did he know that this day would change his life forever. On September 11, 2001, Tuohey, a ticket agent for U.S. Airways, checked in terrorist Mohammed Atta for a flight that started a chain of events that would change history.

Tuohey was working the U.S. Airways first-class check-in desk when two men, Atta and his companion Abdul Azziz-Alomari, approached his counter. From all outward appearances, the men seemed to be normal businessmen, but Tuohey felt something was wrong.

“I got an instant chill when I looked at [Atta]. I got this grip in my stomach and then, of course, I gave myself a political correct slap…I thought, ‘My God, Michael, these are just a couple of Arab businessmen.’”

Then his eyes locked on Atta.

“It just sent chills through you. You see his picture in the paper (now). You see more life in that picture than there is in flesh and blood,” Tuohey said.

Then Tuohey went through an internal debate that still haunts him.

“I said to myself, ‘If this guy doesn’t look like an Arab terrorist, then nothing does.’ Then I gave myself a mental slap, because in this day and age, it’s not nice to say things like this,” he said. “You’ve checked in hundreds of Arabs and Hindus and Sikhs, and you’ve never done that. I felt kind of embarrassed.”

“When I looked at their tickets, they had first-class, one-way tickets – $2,500 tickets. Very unusual,” he said. “I guess they’re not coming back. Maybe this is the end of their trip.”

The massive issue that has remained almost unexplored over the last five years is whether the Bush Administration’s campaign against racial profiling of Arab airline passengers, first announced by George W. Bush in his second debate with Al Gore on 10/11/00, contributed, directly or indirectly, to the various airport personnel refusing to act on their natural suspicions of the 19 Arab terrorists.