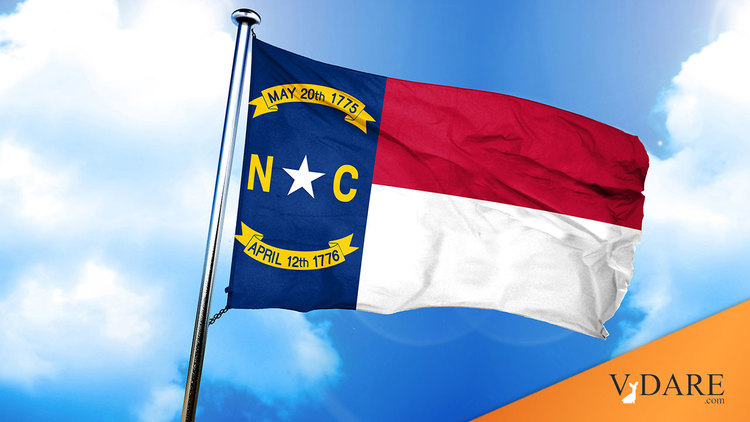 North Carolina is a great place to visit, there's so much to see. It has Atlantic coastland, islands, rivers, forests, farmlands, mountains and historic cities.

In the past year and four months I've been to North Carolina three times. There's a lot to see, and I've only seen a fraction of it.

As in other states, Confederate monuments are under attack in North Carolina, even the statues at county courthouses.

Lecia Brooks, SPLC's chief of staff, says the number of monuments and memorials has been declining recently. Many still stand, but "24 memorials [taken down] in 2020 is quite significant,” she said.https://t.co/YNux5TgH5b

Then there’s the NC Campaign to Remove Confederate Monuments and NC CRED (North Carolina Commission on Racial & Ethnic Disparities in the Criminal Justice System). If that latter group were honestly living up to its title, it would be convincing young black men not to commit crimes rather than fighting statues.

A September article on a CBS affiliate in the state reports on the situation:

In North Carolina, 71 Confederate monuments remain [later says 171], according to Southern Poverty Law Center. SPLC Chief of Staff Lecia Brooks said that number’s been declining in recent years. “North Carolina still has a number of monuments and memorials to go, but 24 memorials in 2020 is quite significant,” Brooks said.

Brooks said more monuments were removed in North Carolina in 2020 than the previous four years combined. She said the only state that removed more monuments in 2020 was Virginia.

“It’s also significant because North Carolina has a preservation law, a so-called preservation law that actually protects the removal of monuments, the changing of names, and that kind of thing,” Brooks said.

Brooks is referring to a 2015 law that requires the North Carolina Historical Commission to approve the removal or relocation of monuments.

James E. Williams, Jr., an attorney, is part of an effort to remove Confederate monuments and symbols from courthouses in the state. He knows of at least 13 communities working to remove one of the symbols.

“Why they should come down from courthouse spaces is because they are inconsistent with this notion of equal justice for all,” Williams said.

He said there are no Confederate monuments at courthouses in Wake County.

[How many Confederate monuments are left in North Carolina? by Gilat Melamed, CBS17.com, September 29, 2021]

In a poll from earlier in the year, the majority of respondents favored leaving the monuments up, but support is not as high as a previous poll:

During 2020, 168 Confederate monuments or symbols were removed from public spaces around the United States, including 24 in North Carolina.

The High Point University poll asked almost 1,400 people about the monuments between March 30 and April 2. The new poll asked many of the same questions from a November 2019 poll to see how attitudes had changed.

“We found only a modest shift in North Carolinians’ attitudes,” said Jason Husser, director of the Elon Poll and associate professor of political science. “Those in favor of removing monuments from public spaces increased from 35 percent to 42 percent.”

That 2019 poll found that more than 65% of people in North Carolina said the monuments should stay in public spaces. The online poll has a credibility interval of 2.8%.

I invite the reader to see also my previous articles MEMO FROM MIDDLE AMERICA: Sen. Lankford (R-OK) Must Stop Grovelling To People Who Hate Him...And Us (January 2021), Seeing the South-Before America-Haters Tear the Monuments Down (September 2020)  and The SPLC Still Whipping Up War on Confederate Monuments—Where is This Hatred Headed? (June 2021).