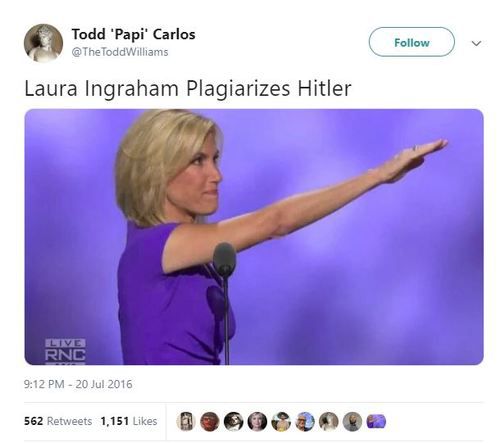 Nathaniel Parker
A+
|
a-

Just watched Laura Ingraham deliver her opening monologue, discussing the invasion over the Rio Grande.  Among the things the BP agents she interviewed mentioned is that many woman are delivering immediately after coming ashore.  Ingraham discussed some of the many costs of their invasion that we bear, BUT DID NOT MENTION BIRTHRIGHT CITIZENSHIP. Is she a complete idiot (she is the victim of a Dartmouth education), or has Fox News forbidden any discussion of birthright citizenship?

She’s still covering the border now, and I’m watching to see if she’ll mention birthright citizenship later on.So far, not a word.  Now Ingraham has Victor Davis Hanson on; will he be sharp enough to highlight birthright citizenship as at the heart of the invasion?  No, he didn’t.  His beat is that it’s not moral to be an illegal alien, etc.  Now she’s on to how Jared is on the Hill pushing more legal immigration.  What a betrayal, for which Trump is culpable.  Now she’s done with her invasion segment, with no mention of birthright citizenship by anyone. Pitiful. And if she's worrried about being called racist, they'll call her racist anyway, see above.