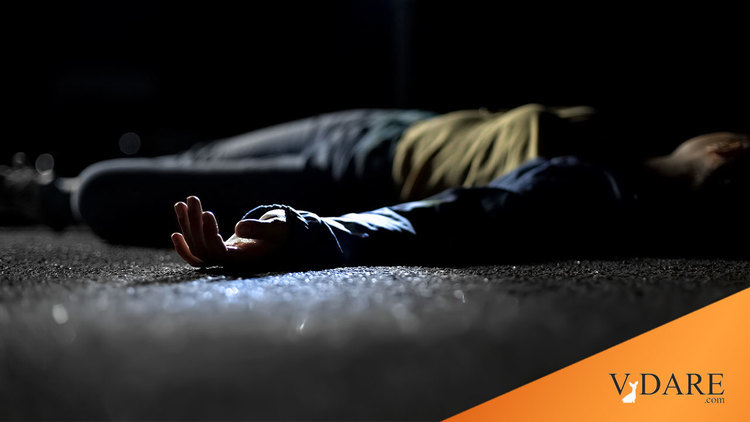 Earlier: NYT: Murders Up In 2021...Owing To Racial Reckoning

Startling surge in L.A. bloodshed as COVID-19 fades: ‘Too many guns in too many hands’

…As COVID-19 began hospitalizing and killing more people in Los Angeles last year, so did shootings in the street. The increased bloodshed, much of it linked to gangs, surged as the economy faltered, leading to the deadliest year of violence in L.A. in a decade.

Now, four months into 2021, life is returning to normal in many quarters of the city as vaccination efforts drive down coronavirus infections, shutdown orders are lifted and businesses reopen.

The gun violence, however, is not receding.

According to Los Angeles Police Department data, the city as of Saturday had seen 465 shootings since Jan. 1, an almost 67% increase over the same period last year. Homicides, at 115 as of Sunday, were up more than 26%.

Police say gangs were often to blame; disputes at homeless encampments were another major factor. …

Preliminary data from the L.A. County Sheriff’s Department show that homicides in surrounding areas increased by more than 113% in the first three months of this year, with 64 killings, compared with 30 during the same period in 2020. Aggravated assaults with guns, including shootings, jumped 82% during that time, from 255 to 465.

At weekly meetings this year of the civilian Police Commission, LAPD Chief Michel Moore has lamented the violence, ascribing blame to the wide availability of guns, including homemade ones known as ghost guns, despite gun arrests this year being up more than 90%.

“It’s frankly too many guns in too many hands,” Moore told the commission recently.

Moore also noted that more than a dozen homicide victims this year were homeless and said the LAPD has linked much of the violence to the “interchange between gang violence and homeless encampments, where we’ve seen an increase in retaliation and in disputes involving persons experiencing homelessness and narcotics sales.”

At the macro level, Moore has argued, the increased violence is inextricably linked to the pandemic, which has wreaked havoc on social safety nets and the economy, disrupted violence prevention efforts and blocked intervention workers from sitting at the bedsides of shooting victims, or next to their family members in emergency wards, to help prevent cycles of retaliation.

Police officials across the country have noted similar forces, as their cities — big and small, led by Democrats and Republicans — also suffer under surging gun violence. Criminologists have pointed to the pandemic, and its multitude of impacts, as the only common element across the country.

After all, what else happened in 2020 that could possibly have affected crime and punishment? I followed the news closely in 2020 and I’m sure if anything else happened, I would have heard about it.

Some in L.A. County cite other factors, such as policies from new Dist. Atty. George Gascón that are perceived as lenient on criminals or local pandemic-related rules to release prisoners and arrestees ahead of trial. But experts say those theories don't explain the national surge.

What other national news was there over the last year besides the pandemic, huh? There wasn’t any. If anything else at all had happened in 2020 to encourage criminals and discourage cops, surely the Los Angeles Times would remember it happening, right?