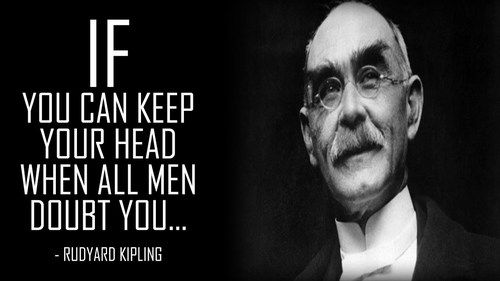 Old Eyebrows is in the news, I see.

Everyone is welcome to my take on him back in 2000, which I think has brought in more reprint requests than anything else I've written.  Sample:

I do not mean to imply that there is anything wrong with the poems of Empire and army life. Some of them stand among Kipling's best. They are hardly ever bombastic and practically never militaristic. Kipling's entire view of the military experience, as lived by common soldiers, can be seen laid out for inspection (so to speak) in "The Young British Soldier." Here it is, as it undoubtedly was: cholera and foul liquor, sunstroke and the faithless wife, terror under fire and the horrible, utterly inglorious end.

When you're wounded and left on Afghanistan's plains,
And the women come out to cut up what remains …

Hardly a recruiting poster. Kipling knew that a British soldier was actually more likely to die of disease than in combat — a fact that remained true until World War One. (In the Boer War the ratio was five to one.) Here comes the old flotilla on the road to Mandalay, guns primed to teach King Thebaw a lesson, no doubt. But look a little closer: "With our sick beneath the awnings when we went to Mandalay!" There you have the Kipling touch, the stroke of raw realism that stops the eye and turns the mood — like those broken dinner-knives. Kipling's god was, in his own words, the God of Things As They Are. To say, in the common phrase, that he had a journalist's eye for detail is preposterously inadequate. It is hard to think of any writer, in any genre, that could put forward so precisely the telling detail, at so precisely the telling moment, as deftly as Kipling could. To return for a moment to the prose, look at the depth of detail in Kim. The novel is a rain forest of detail, with a thousand species of detail jostling together — the fold of a robe, the girth of a leg, the cut of a Marathi's turban, the handling of food and exchanging of courtesies both false and true, the taste of air in the hills and the color of twilight on the Grand Trunk Road. That is what makes the novel so unforgettable.  [Rudyard Kipling and the God of Things As They Are by John Derbyshire; The New Criterion, March 2000.]