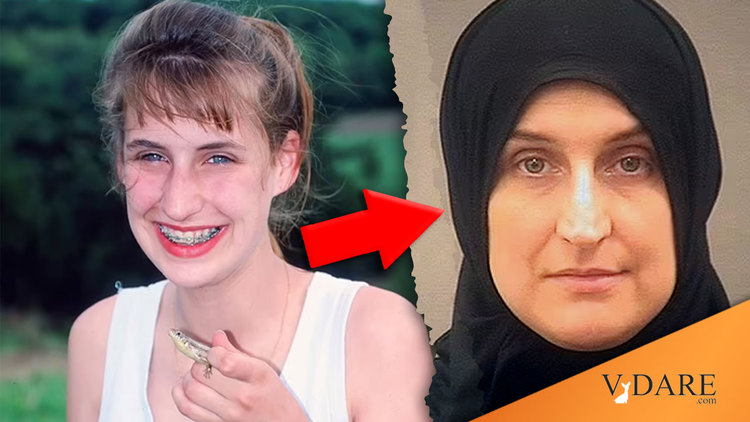 This happens enough to be a pattern.

EXCLUSIVE: A wistful smile and a flower in her hair, this is the Kansas woman - once known as an 'intelligent and caring' student who loved science and photography - decades before joinin...
via https://t.co/ukePCFr1gS https://t.co/RITmHgPe2E

How 'caring' Kansas girl went from 'intelligent student who loved science and photography' to machine gun-toting ISIS jihadi who led an all-female battalion in Syria, by Karen Ruiz, Dailymail.com, February 2, 2022

A young, white American from a wholesome location like Topeka heads off to the Middle East and picks up a weapon for some radical Islamic group.

John Walker Lindh is another example.

Stories about "Americans" or "British" who join ISIS often list ethnically Pakistani, Bangladeshi or Somali young people, though nobody should be shocked that Hoda Muthana, of Yemeni descent, joined ISIS. She's about as much of an "Alabama woman" as Marie Antoinette.

Some explanations are easy:  young people want a thrill, an adventure.

Above all, it's got to be "other"—other than white, American, plain, boring, Republican or Lutheran.  Lindh, from wealthy Marin County, California, was apparently transfixed by Malcom X at a young age, and things just went from there.

Interestingly, there's nothing "liberal" about radical Islam—it's anti-gay, ferociously traditional on sex roles, unabashed about violence and doesn't even allow alcohol.  The lure of non-whiteness is so strong that it's able to overcome all of that.

In a perverse way, an ISIS fighter is about as woke as you can get:  armed, and not white.

Young American whites are ripe for the picking.  They live in a culture of endless white-bashing, so it's no surprise that they're eager to literally walk onto battlefields to shed their white skin.

College, the military, the American workplace, Christian churches—they've all become temples in the service of this emptiness, and offer little refuge.

So, we get Allison Brooks turning into Umm Mohamed al-Amriki.