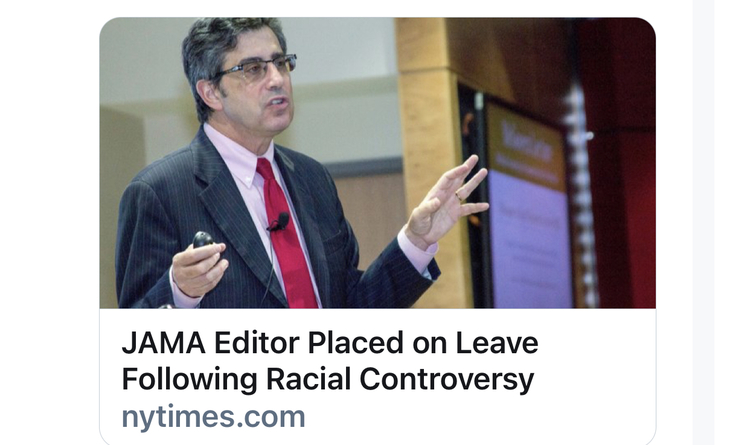 JAMA Editor Placed on Leave After Deputy’s Comments on Racism

After a staff member dismissed racism as a problem in medicine on a podcast, a petition signed by thousands demanded a review of editorial processes at the journal.

Following controversial comments on racism in medicine made by a deputy editor at JAMA, the editor in chief of the prominent medical journal was placed on administrative leave on Thursday.

A committee of the American Medical Association, which oversees the journal, said Dr. Howard Bauchner would be replaced by an interim editor pending results of an independent investigation. …

JAMA is one of the world’s leading medical journals, publishing research that shapes the scientific agenda and public policy around the globe.

Therefore, nobody associated with scientific research can be allowed to have doubts about our culture’s most sacred dogmas, such as systemic racism.

The controversy began when Dr. Ed Livingston, a deputy editor, said on a Feb. 24 podcast that structural racism no longer existed in the United States.

“Structural racism is an unfortunate term,” said Dr. Livingston, who is white. “Personally, I think taking racism out of the conversation will help. Many people like myself are offended by the implication that we are somehow racist.”

The podcast was promoted with a tweet from the journal that said, “No physician is racist, so how can there be structural racism in health care?” The response to both was swift and angry, prompting the journal to take down the podcast and delete the tweet.

A week later, Dr. Bauchner addressed the controversy. “Comments made in the podcast were inaccurate, offensive, hurtful, and inconsistent with the standards of JAMA,” Dr. Bauchner said in a statement. “We are instituting changes that will address and prevent such failures from happening again.”

Skepticism has no role in Science. Unstinting belief in the True Faith as revealed unto us by Dr. Ibram X. Kendi is the only way forward.