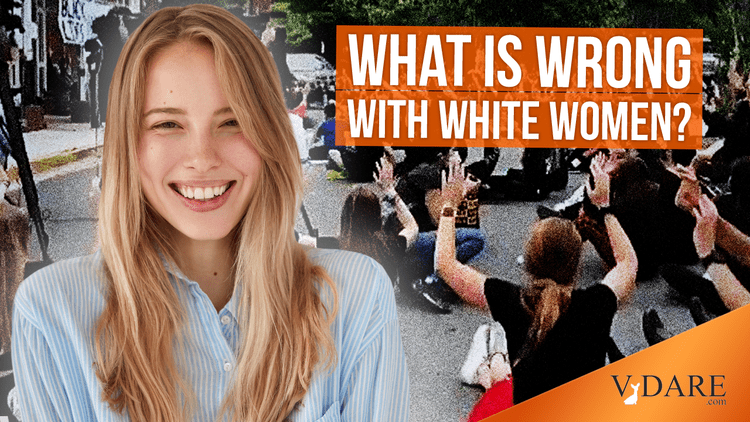 Earlier: JOHN DERBYSHIRE: I Will Not Genuflect To This Church Of Antiracism

There was a preponderance of white women at the Bethesda gathering I wrote about  above, where GoodWhites worshipped at the new  "Church Of Antiracism"

Leaders are talking about how parents need to commit to making sure their teaching their children a better way. #Blacklivesmatter @wusa9 pic.twitter.com/kF9rajT5Si

White women have been much in evidence at all the protests, and it calls for some kind of explanation.

I should probably say single white women. As Steve Sailer has noted, and as Ed West covers in his new book Small Men on the Wrong Side of History: How To Be A Modern Conservative, which I recommend to your attention, quote from Ed:

The marriage rate among white women remains one of the most reliable variables for predicting the Republican Party's support in any state.

All right, so, single white women: What are they doing, filling the pews at the Church of Antiracism—whose gospel is, let's be blunt about it, anti-white?

I don't know the answer, but whenever this comes up on a Dissident Right human-sciences thread, there's always someone arguing that it's a matter of evolutionary psychology. He argues—and yes, of course it's always a he—that white women are dissatisfied with the weakness of white men, and keen to submit to some more forceful conqueror.

So is the anti-whiteness of single white women the fault of white men somehow? I don't see why it shouldn't be; everything else is.