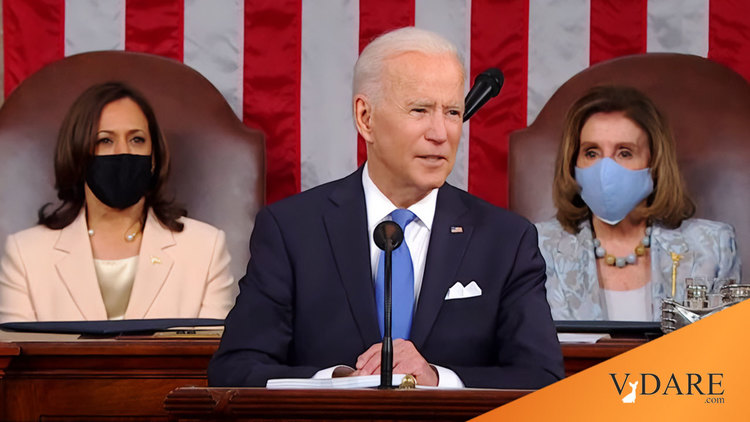 Joe Biden's Speech: Lord, Give Me The Confidence Of A Mediocre White Man From the President’s quasi-State of the Union address:

And we won’t ignore what our intelligence agents have determined to be the most lethal terrorist threat to our homeland today: White supremacy is terrorism. We are not going to ignore that either. My fellow Americans, look, we have to come together to heal the soul of this nation. It was nearly a year ago before her father’s funeral when I spoke to Gianna Floyd, George Floyd’s young daughter.

She’s a little tyke, so I was kneeling down to talk to her, so I can look at her in the eye. She looked at me, she said, “My daddy changed the world.” Well, after the conviction of George Floyd’s murderer, we can see how right she was — if, if we have the courage to act as a Congress. We have all seen the knee of injustice on the neck of Black Americans. Now is our opportunity to make some real progress.

The vast majority, men and women wearing the uniform and a badge, serve our communities and they serve them honorably. I know them, I know they want — I know they want to help meet this moment as well. My fellow Americans, we have to come together to rebuild trust between law enforcement and the people they serve, to root out systematic racism in our criminal justice system and enact police reform in George Floyd’s name that passed the House already.

I know Republicans have their own ideas and are engaged in productive discussions with Democrats in the Senate. We need to work together to find a consensus. But let’s get it done next month, by the first anniversary of George Floyd’s death. The country supports this reform and Congress should act. We have the giant opportunity to bend the arc of the moral universe toward justice, real justice.

And with the plans outlined tonight, we have a real chance to root out systematic racism that plagues America and American lives in other ways. A chance to deliver real equity: good jobs, good schools, affordable housing, clean air, clean water, the ability to generate wealth and pass it down to generations because you have an access to purchase a house. Real opportunities in the lives of more Americans — Black, white, Latino, Asian-Americans, Native Americans.

Look, I also want to thank the United States Senate for voting 94-1 to pass Covid-19 Hate Crimes Act to protect Asian-Americans and Pacific Islanders. You acted decisively. You can see on television the viciousness of the hate crimes we’ve have seen over the past year and for too long. I urge the House to do the same and send that legislation to my desk, which I will glad, anxiously sign.

I also hope that Congress will get to my desk the Equality Act, to protect L.G.B.T.Q. Americans. To all transgender Americans watching at home, especially young people, who are so brave, I want you to know, your president has your back. Another thing, let’s reauthorize the Violence Against Women Act, which has been law for 27 years. Twenty-seven years ago, I wrote it.

… Now I need not tell anyone this, but gun violence is becoming an epidemic in America. The flag at the White House was still flying at half-mast for the eight victims of the mass shooting in Georgia when 10 more lives were taken in a mass shooting in Colorado. And in the weekend between those two events, 250 other Americans were shot dead in the streets of America. 250 shot dead. I know how hard it is to make progress in this issue. In the ’90s we passed universal background checks, a ban on assault weapons and high-capacity magazines that hold 100 rounds that can be fired off in seconds. We beat the N.R.A. Mass shootings and gun violence declined, check out the report, over 10 years.

But in the early 2000s, the law expired. We have seen daily bloodshed since then. I’m not saying that if the law had continued, we wouldn’t have seen bloodshed. More than two weeks ago in the Rose Garden, surrounded by some of the bravest people I know, the survivors and families who lost loved ones to gun violence, I laid out several of the Department of Justice actions that being taken to impact this epidemic. One of them is banning so-called ghost guns.

We must crack down on the Hobbyist Menace!

These are homemade guns built from a kit including directions how to finish the firearm. The parts have no serial numbers. So they show up at crime scenes and they can’t be traced. The buyers of those ghost kits are not required to pass any background checks. Anyone, from a criminal or terrorist, could buy this kit and within 30 minutes have a weapon that’s lethal. But no more. And I will do everything in my power to protect the American people from this epidemic of gun violence, but it’s time for Congress to act as well.

Look. I don’t want to be become confrontational. We need more Senate Republicans to join the overall majority of Senate Democrat colleagues and close the loopholes required in background check purchases of guns. We need a ban on assault weapons and high-capacity magazines. And don’t tell me it can’t be done. We did it before and it worked. Talk to most responsible hunters and gun owners. They’ll tell you there’s no possible justification for having 100 rounds in a weapon. You think they’re wearing Kevlar vests?

These kinds of reasonable reforms have overwhelming support from the American people, including many gun owners. The country supports reform, and Congress should act. This shouldn’t be a red or blue issue. And no amendment to the Constitution is absolute. You can’t yell fire in a crowded theater. From the very beginning, there were certain guns, weapons that could not be owned by Americans. Certain people could not own those weapons, ever. We’re not changing the Constitution. We’re being reasonable. I think this is not a Democrat or Republican issue, I think it’s a Republican issue.

And here’s what else we can do. Immigration has always been essential to America. Let’s end our exhausting war over immigration. For more than 30 years, politicians have talked about immigration reform and we’ve done nothing about it. It’s time to fix it. On Day 1 of my presidency, I kept my commitment and sent a comprehensive immigration bill to the United States Congress.

If you believe we need a secure border, pass it, because it has a lot of money for high-tech border security. If you believe in a pathway to citizenship, pass it. There’s over 11 million undocumented folks, the vast majority here overstayed visas. Pass it. We can actually — if you actually want to solve the problem, I have sent a bill to you, take a close look at it.

We also have to get at the root of the problem of why people are fleeing particularly to our southern border from Guatemala, Honduras, El Salvador. The violence. The corruption. The gangs. The political instability. Hunger. Hurricanes. Earthquakes. Natural disasters.

Thank God the Biden Administration is going to spend whatever it takes to prevent earthquakes in Central America.

When I was president, my president — when I was vice president, the president asked me to focus on providing help needed to address the root causes of migration. And it helped keep people in their own countries instead of being forced to leave. And the plan was working, but the last administration decided it was not worth it. I’m restoring the program and asked Vice President Harris to lead our diplomatic effort to take care of this. I have absolute confidence she will get the job done.

Now look, if you don’t like my plan, let’s at least pass what we all agree on. Congress needs to pass legislation this year to finally secure protection for Dreamers, the young people who have only known America as their home. And, permanent protection for immigrants who are here on temporary protective status who came from countries beset by man-made and natural-made violence and disaster. As well as a pathway to citizenship for farmworkers who put food on our tables.