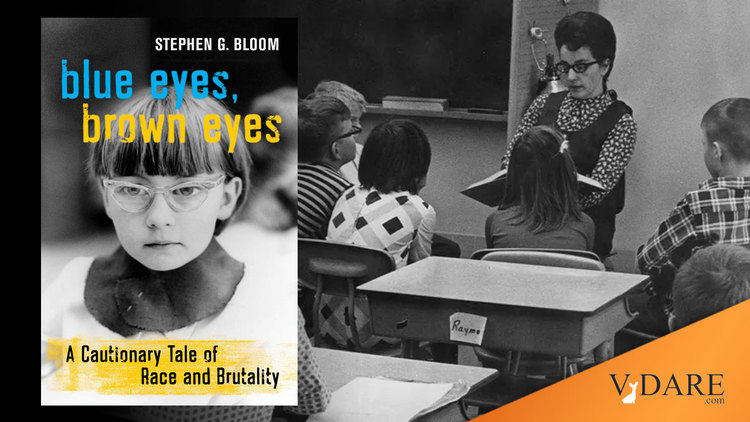 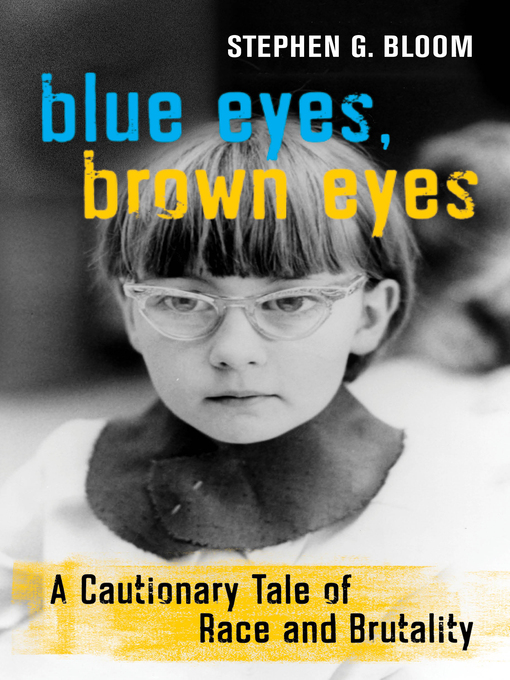 Jane Elliott's famous experiment, as written up in Stephen G. Bloom's new book Blue Eyes, Brown Eyes: A Cautionary Tale of Race and Brutality, below, was based on the largely unexamined (by Elliott) idea that there is no more difference between races (differentiated by skin color) than there is between white children with different eye colors.

If you believe this idea, a.k.a. the "Standard Social Science Model," you will believe that if there's an "Achievement Gap," a "Wealth Gap," or an incarceration gap, it's caused by white people, and racism. This is not true; for example, a black person is six times more likely than a non­black to commit murder... which is why white parents even today don't send their children to black-majority schools if they can help it.

The never-before-told true story of Jane Elliott and the "Blue-Eyes, Brown-Eyes Experiment" she made world-famous, using eye color to simulate racism.

The day after Martin Luther King, Jr.'s assassination in 1968, Jane Elliott, a schoolteacher in rural Iowa, introduced to her all-white third-grade class a shocking experiment to demonstrate the scorching impact of racism. Elliott separated students into two groups. She instructed the brown-eyed children to heckle and berate the blue-eyed students, even to start fights with them. Without telling the children the experiment's purpose, Elliott demonstrated how easy it was to create abhorrent racist behavior based on students' eye color, not skin color. As a result, Elliott would go on to appear on Johnny Carson's Tonight Show, followed by a stormy White House conference, The Oprah Winfrey Show, and thousands of media events and diversity-training sessions worldwide, during which she employed the provocative experiment to induce racism. Was the experiment benign? Or was it a cruel, self-serving exercise in sadism? Did it work?

Blue Eyes, Brown Eyes is a meticulously researched book that details for the first time Jane Elliott's jagged rise to stardom. It is an unflinching assessment of the incendiary experiment forever associated with Elliott, even though she was not the first to try it out. Blue Eyes, Brown Eyes offers an intimate portrait of the insular community where Elliott grew up and conducted the experiment on the town's children for more than a decade. The searing story is a cautionary tale that examines power and privilege in and out of the classroom. It also documents small-town White America's reflex reaction to the Civil Rights Movement of the 1970s and 1980s, as well as the subsequent meteoric rise of diversity training that flourishes today. All the while, Blue Eyes, Brown Eyes reveals the struggles that tormented a determined and righteous woman, today referred to as the "Mother of Diversity Training," who was driven against all odds to succeed.

Elliott gave an interview to a webzine in Australia in 1998, where she was trying to convince Australians that their treatment of aborigines was exactly the same thing as Americans' treatment of blacks.

Notably, she seems to think that the English language is among the many things stolen from people of color:

And here's her excusing black racism against whites on the basis of historical and modern day experience:

Sorry, but that's just as much "racism" as any white person hating people of color because the Indians murdered his great-uncle, or because he's been attacked on the street by non-whites... or because he's been reading the history of crime and race relations since, oh, say 1968, when Ms. Elliott started experimenting on white Iowa schoolchildren.