Is Obama Negotiating the Release of the Blind Sheik?

Does President Obama really think that freeing the murdering jihadist Omar Abdel-Rahman will chill the violent protests now taking place across the Muslim world? Also known as the blind sheik, he is serving a life sentence for the 1993 terror attack against the World Trade Center that killed six and injured hundreds of others.

Below, this poster of Sheik Omar Abdel-Rahman was shown by a follower in Cairo, Egypt, September11, 2011. 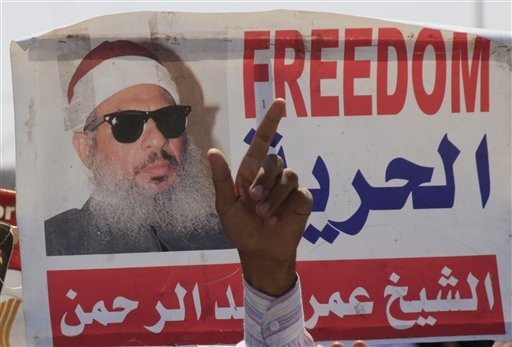 The September 11 protest in Cairo was actually about freeing the sheik, not a Youtube video.

Has the President learned nothing from the the last week of chaos throughout the Muslim world? It doesn’t appear so. Even an earlier practicioner of appeasement, Neville Chamberlain, finally understood that a policy of concessions to Hitler was not a good idea when the bombs started falling.

But Obama seems to believe that his friends the Muslims, whom he claimed to understand so well, will somehow respond positively to American weakness, contrary to 1400 years of history. He even promised the voters in 2007 that his Islamic background made him uniquely qualified to bring peace between Americans and Muslims.

Two days after the Cairo riot and the murder of America’s ambassador to Libya, President Obama phoned Mohammed Morsi and told Egypt’s leader that Obama “rejects efforts to denigrate Islam, but underscored that there is never any justification for violence against innocents and acts that endanger American personnel and facilities.”

Since then, the President has been busy campaigning and appearing on Letterman, as if it were just another week, and the Middle East weren’t on fire and his policy of Muslim appeasement in tatters. One would think that at least the appearance of leadership and being on the job for America’s welfare would be a positive for his reelection.

Back to the blind sheik matter, it’s a puzzlement why the Islamophilic President is considering such a rash act, even assuming he waits until the lame duck session to release abdel-Rahman. America already looks like a impotent former superpower to all the hungry hostiles from Red China to Cairo, so it hardly seems wise to accelerate the decline by surrendering so cravenly to Islamist intimidation. Still, one can easily imagine Obama doing just that.

The U.S. State Department is currently in negotiations with the Egyptian government for the transfer of custody of Omar Abdel-Rahman, also known as “the Blind Sheikh,” for humanitarian and health reasons, a source close to the the Obama administration told TheBlaze.

Glenn Beck revealed the controversial news on his show Monday.

The Blind Sheikh is currently serving a life sentence in American prison for his role in the 1993 World Trade Center bombing, but the newly-elected Islamist government in Egypt has been actively petitioning his release. Many have pinpointed a cause of last week’s unrest in in the country to be protests over the Blind Sheikh’s release– not an anti-Islam YouTube video.

Citing the handling of the current crisis in the Middle East, and the administration’s explanation that an anti-Islamic video is to blame, Beck warned that the administration may be trying to initiate a “Bubba effect.”

“If this is true… I believe this administration is trying to initiate a ‘Bubba effect,’” he explained. “That is, the average person turning against the government, collectively… because no one trusts them.”

“No matter how bad a citizen may be behaving, the citizen’s reaction is worse in the Bubba effect. We have to be very careful America… because it’s going to get tougher from here on out.”

Former State Department senior official Christian Whiton appeared on Real News From TheBlaze to discuss the report, and stated that it is certainly a possibility.

“Unfortunately, I think it is [conceivable]. And it’s unfortunate because it amounts to negotiating with terrorists…but after all, this administration was inching closer and closer to some sort of trade of terrorists with the Taliban, so perhaps it’s considering the same with [Egyptian President Morsi].”

He also noted that the administration could avoid what he deemed “political suicide” by “whispering” to Egypt’s President Morsi that they can move in that direction after the election.

Buck Sexton noted that the transfer of the Lockerbie bomber was similarly unexpected.

“As with so many things in the Middle East, we’ve accepted the unacceptable,” Whiston remarked.