A story in four acts, via one of Steve Sailer's commenters,

who reports that the "poor Finns are starting to understand third-world honesty":

...the European Court of Human Rights ruled that Finland violated Article 2 of the European Convention on Human Rights, which states that everyone has the right to life. This decision marks the first time Finland has been found guilty of breaching Article 2.

...The complaint to the court was made by Ali's daughter Noor, who also received a negative asylum decision from Finland in 2016. Finland's Immigration Service, Migri, justified the decision to return Noor to Iraq on the grounds that both her mother and father would form a safety net for Noor and her daughters in their native country.

The court ordered Finland to pay 20,000 euros to Noor in compensation for the treatment of her father.

I bet that in spite of Acts 3 and 4, Finland doesn't get its 20K euros back, and won't be able to deport the daughter, either. 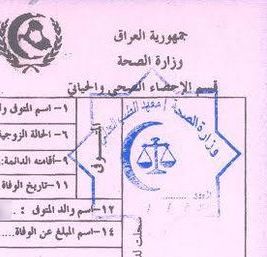 I've decided to tag this as a Hate Hoax, below, but it differs from other such hoaxes because he didn't say he'd been killed by white people, he claimed to have been murdered by other Iraqis, for ordinary Iraqi reasons.

That's a copy of his death certificate in the image above. In general, Western governments shouldn't believe certificates like that from foreign governments in Third World countries, because not only do they keep bad records, they're easily bribed.

I see that the official stamp on the death certificate bears, in addition to an Islamic Crescent, an image of the Scales of Justice. I suspect that goes back to British rule in Iraq.