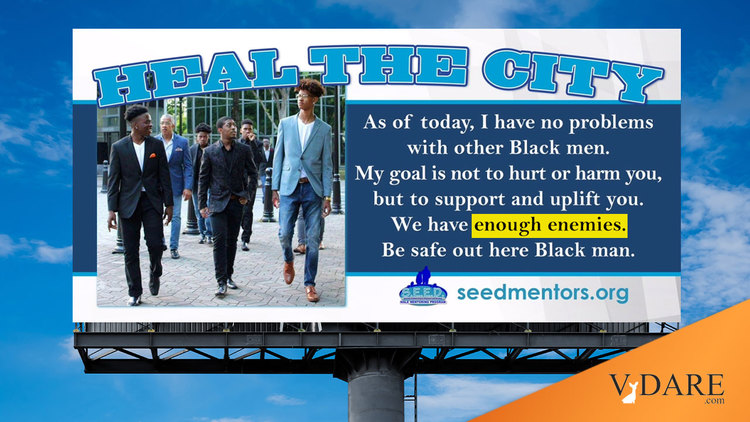 In Trenton, NJ, Billboard Asks Blacks To Stop Shooting Other Blacks Because “We Have Enough Enemies”

We swear this time the message will get through.

This latest billboard positioned in the city’s Wilbur Section across the street from P.J. Hill Elementary School, hopes to use attraction as a way to change attitudes and behaviors.

“It’s a billboard that pays tribute to all the young African American men who are striving to be young men of character, who make an impact in their community and in the world. These young men are in college, gainfully employed, succeed as entrepreneurs, or in trade school,” Stacy Heading, a certified life coach and program director of Servants Endeavoring to Empower and Develop (S.E.E.D) Male Mentoring Program.

The billboard will be officially presented on Thursday, Sept. 16 at 5 p.m.

Heading, Youth Services and Outreach Manager for Isles Youth Build Institute, said young men featured on the billboard are S.E.E.D. mentees “engaged in planning their futures and taking the necessary steps to become strong, committed men who contribute to their families and their community.”

The billboards appear as part of a “Heal The City” effort that believes these postings can be a powerful way to provide positive and uplifting messages to the community in which they are placed.

In June 2014 the group made a commitment to place positive billboards throughout the City of Trenton for a year.

“We met that commitment and over that year approximately 10 different billboards were on display at different times throughout the city,” Heading noted.

To date, “Heal The City” has placed almost 40 billboards in targeted communities. Heading said the billboards exist as a source of encouragement and enlightenment.

“They’re changing lives and attitudes one viewer at a time,” Heading said.

He added, “Young African American men face numerous obstacles as they grow up, such as racism, violence, and an educational system that often mistakes their energy for aggression.”

“They are often stereotyped and labeled. Some of these young men are being raised by strong single mothers who make sure their sons are focused on their future and provide them with opportunities that keep them on the path to realizing their goals. They make sure their sons have a strong support system that includes male mentors who help these young men make the right choices.” [More]

Has this same billboard ever been put up in a white community to convince white people to not kill/shoot other white people?