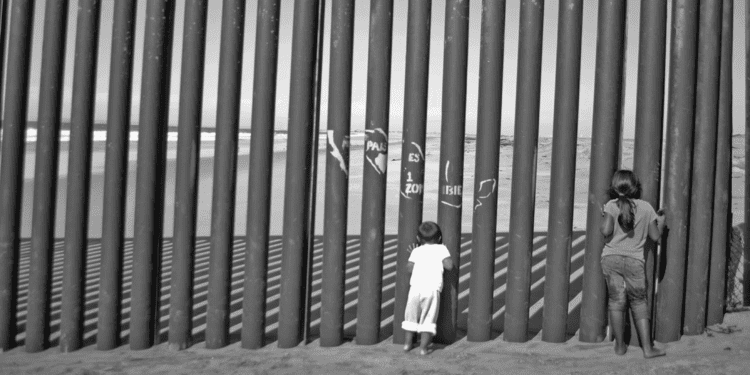 In Tijuana, Migrants Are Trying To Buy Children To Use As Border Tickets

We’ve been told for years that Hispanic aliens and foreigners in general have family values that are superior to our own. So it’s curious how children are now coin of the realm in illegal alien border crossings.

The San Diego Union-Tribune noted that fact on its Friday front page, shown below: 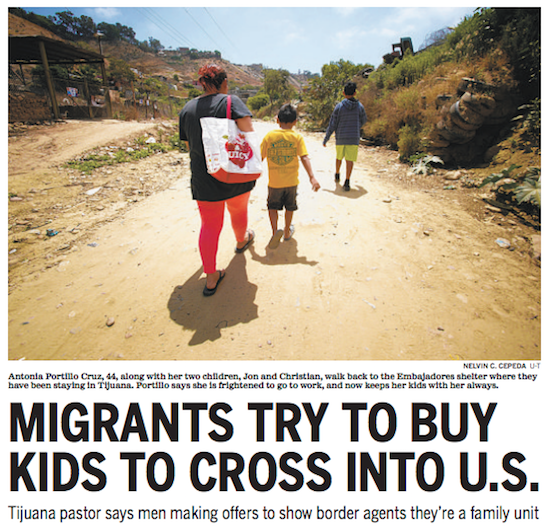 Not every foreign parent is up for selling their kid — which would be slavery, of course — but enough do that US officials have turned to DNA testing of suspicious family units.

Sometimes the fake offspring are merely rented, as reported here in 2014. When Tucker Carlson interviewed the new ICE director Mark Morgan in May, he said increased investigations have found that around 25 percent of border-crossing families are fake with rented kids.

Just imagine if all this energy spent in breaking into the USA were redirected into reforming the home countries — let a thousand flowers bloom!

But back in the real world, America’s jobs and welfare offices beckon irresistibly to the world, now home to more than 7.7 billion persons, many of whom are poor.

Tijuana, Baja California —  Some migrants in Tijuana are trying to purchase children from vulnerable single mothers in local shelters so they can more easily cross into the United States, according to shelter directors, migrants and Tijuana law enforcement authorities.

Migrants in Tijuana shelters said they are alarmed after reports of single mothers being approached by groups of men who have offered to buy children to improve their chances of safely crossing into the United States.

A decades-old legal document, known as the Flores agreement, says migrant children should only be held briefly in U.S. border custody, which often means they are released, along with the parent or guardian with whom they crossed while they wait for their asylum cases to make their way through clogged immigration courts.

Typically, when migrants are apprehended at the border with their children they are held in custody for a few days before they are released. Single adults who cross the border can face months in detention.

U.S. border authorities have been warning since June 2018 about people fraudulently using children who aren’t theirs to pose as family units and gain entry into the United States a claim that critics said was overblown. But now, authorities in Tijuana are warning migrant mothers to keep their children close by and supervised, after reports of men offering to purchase migrant children in order to cross.

“I can’t go to work because I can’t take my eyes off my boys,” said Antonia Portillo Cruz, a 44-year-old migrant from Honduras, who said the men have been targeting the shelter where she stays. She said she witnessed some of the men asking women in the shelter about purchasing their children, but none of them made the offer directly to her.

Portillo said the groups of men have been approaching the Iglesia Embajadores de Jesus shelter in Tijuana and offering about 7,000 pesos, or $350, to purchase a child to cross into the United States. (Continues)