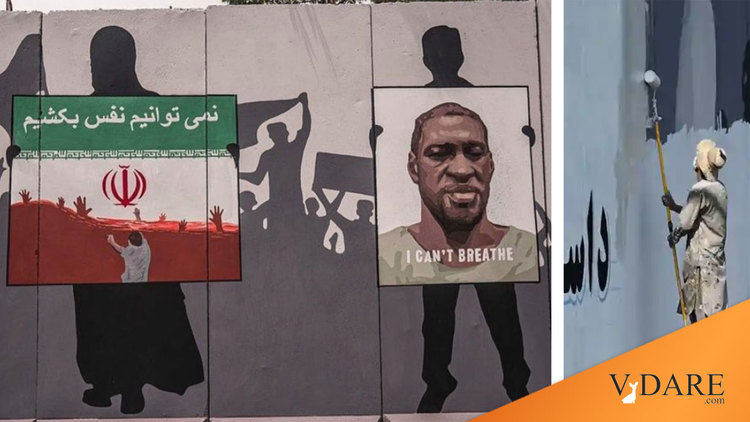 KABUL, Afghanistan — On a concrete blast wall topped with barbed wire near Kabul’s Green Zone, Afghan artists have painted a large mural depicting George Floyd next to an image dedicated to Afghan migrants who recently died in Iran.

“Racism is all over the world and we need to denounce it,” said Omar Ghani, a project manager with the ArtLords group, which painted the mural.https://t.co/5amZBdYJaf

The mural was painted to condemn global racism and connect the stories of Floyd and the migrants, who Afghans say are persecuted and abused in Iran and elsewhere, said Omar Ghani, a project manager with the ArtLords group, which painted the mural.

“Racism is all over the world and we need to denounce it,” he said.

Under the portrait of Floyd are the words “I can’t breathe” in English, which the 46-year-old African American said repeatedly as a white police officer pressed his knee to his neck for nearly nine minutes, until Floyd died on a street in Minneapolis three weeks ago.

His killing was caught on cellphone video and has been replayed repeatedly on the internet and nightly news broadcasts, leading to protests and vigils around the world.

The image dedicated to the Afghans shows hands reaching through the red bar at the bottom of the Iranian flag, which is depicted as a sea of blood. Written in Farsi across the top are the words “We can’t breathe.”

Taliban paint over the ‘soul of Kabul’: Western murals that adorn the Afghan capital’s walls – including one of George Floyd – are being replaced with ‘victory slogans’, Daily Mail, September 8, 2021

The Taliban have started painting over artist’s murals of western symbols and values that adorn the walls of the Afghan capital – including one of George Floyd – and are replacing them with ‘victory slogans’.

Taliban paint over the 'soul of #Kabul': Western murals that adorn the Afghan capital's walls - including one of George Floyd - are being replaced with 'victory slogans'https://t.co/cyJwNy39qu pic.twitter.com/Eymm0VJAYA

They created more than 2,200 murals across the country addressing everything from the killing of George Floyd in the US and the drowning of Afghan refugees in Iran, to gender equality and the signing of the US-Taliban agreement towards peace.

owever, within weeks of the Islamists taking the capital, many of the street art pieces have been painted over, replaced by drab propaganda slogans as the Taliban reimpose their austere vision on Afghanistan.

The mural dedicated to George Floyd, which has the words ‘I can’t breathe’ written in English and who’s death sparked Black Lives Matter protests in the US, has not been covered up yet, though it is perhaps only a matter of time.

The images of workers rolling white paint over the art – who are reportedly paid less than $7 a day – were deeply foreboding for Omaid Sharifi, 34, Artlord’s co-founder, who has been forced to flee to the UAE for his safety.

He said that the murals were the ‘soul of Kabul’ and represented the voice of the Afghan people and painting over them is like putting a shroud over the city.

Speaking to the Guardian, Sharifi said: ‘Some of these murals were the soul of Kabul. They gave beauty to the city and kindness to the people of Kabul who were suffering.

‘These are about the wishes, demands and the asks of Afghan people. It was their voice on these walls. These murals were against corruption and were pushing for transparency.’

The American Empire promotes George Floyd abroad and tears down statues to American heroes (like Robert E. Lee) at home.

Who is the real enemy of the Historic American People? The people who promote George Floyd or those who paint over images of him?