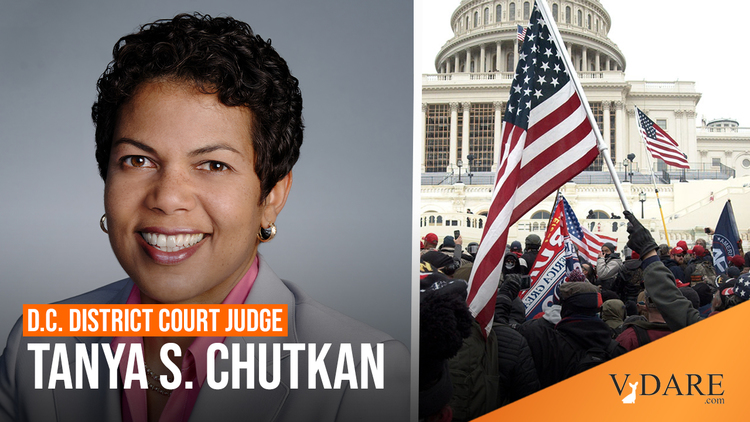 Earlier (2012) Judicial Impeachment In The Air...Now That Obamacare Is In Peril

Judge Tanya Chutkan is a black female judge who is a Jamaican immigrant. She’s also the judge who’s been giving January 6 defendants from the Mostly Peaceful Protest at the Capitol longer sentences than the Federal Government prosecutors. She’s doing this on the specifically political grounds that this protest was, according to her, attempting “violent overthrow of the government.”

A federal judge in Washington has repeatedly sentenced people who stormed the U.S. Capitol to more prison time than prosecutors sought, saying that even people who were not violent should face consequences for joining the unprecedented assault.

In the past week, U.S. District Judge Tanya Chutkan has imposed sentences ranging from 14 to 45 days on four people who pleaded guilty to unlawful parading and picketing inside the Capitol building on Jan. 6 — a misdemeanor offense.

"There have to be consequences for participating in an attempted violent overthrow of the government, beyond sitting at home," Chutkan said at one of the hearings.

'There have to be consequences': Judge ups sentences for Capitol rioters

This is definitely political prejudice—Judge Chutkan was appointed by Barack Obama, and is a former defense lawyer—and shows that Judge Chutkan doesn't have the judicial temperament.

The Wall Street Journal agrees with me on this:

As she says, there "There have to be consequences" for this kind of thing, and that means, in the case of a judge, impeachment.

If Republican Senators or Congressman care about their base—and if they care about being reelected—they should put in a motion to impeach. I know they don't have the votes at the moment, but that only means that the Democrats have to go on record as defending Judge Chutkan.