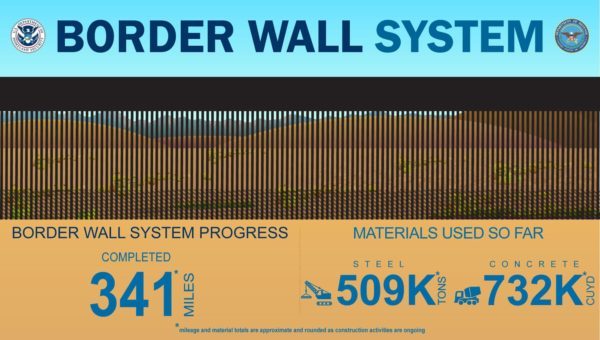 America’s fight against criminal aliens is waged on two fronts: at the border to keep them out, and within the United States, to expel the ones who have made it in. There has been good news on both fronts.

The Trump administration hoped to build 450 miles of new southern border wall in 2020, and may actually build more. On September 29, Border Patrol Chief Rodney Scott announced that since January:

The rate of construction is speeding up, now averaging ten miles per week. The Department of Homeland Security has produced several graphics that illustrate progress: Elder Amador-Lopez, a twice-deported Guatemalan charged with DWI and Assault on a Female. In and around Chicago, ICE arrested 88 illegal aliens, including:

In Denver, Colorado ICE arrested one of its ten most-wanted: Joseph Toro-Zaldivar, below, a once-deported Honduran with pending charges for Assault on a Peace Officer, Strangulation, Felony Menacing with a Weapon, Disarming an Officer, Assault, Criminal Mischief, and Resisting Arrest. As always, ICE and Border Patrol deserve our unwavering support. Let’s hope they keep up the good work.