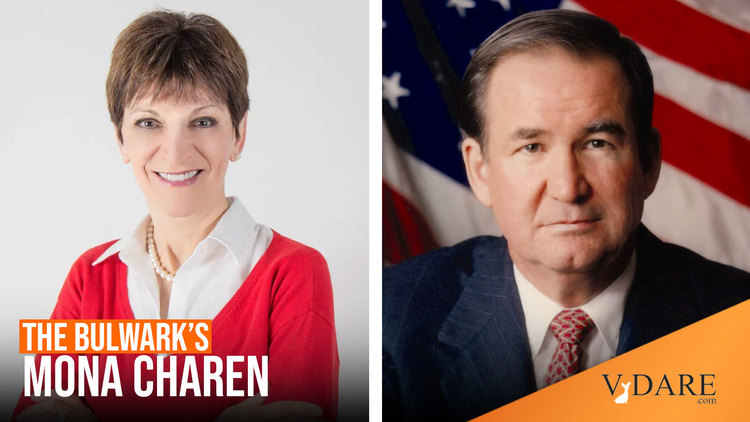 Pat Buchanan is off this month, taking a well-deserved vacation, and his syndicate sends "conservative" columns that they think are a substitute.

We rarely publish them, because they aren’t a substitute for Pat, and of course, being published by us causes SPLC attacks in what I’ve called "guilt by syndication."

This one was by Never-Trumper Mona Charen (now writing for Bill Kristol's Bulwark) and was called, believe it or not, "An America First Immigration Policy."

Her idea of "America First" is mass immigration to solve a shortage of cheap immigrant labor, and she adds, Republicans never used be against legal immigration, but they are now.

But the one factor we discuss too little is immigration—or rather, we emphasize the wrong aspect. Republicans are obsessed with the southern border and the dreaded waves of people (or sometimes "caravans") attempting entry. But we've long had people thronging the Mexican border. What we haven't seen in many decades is a serious decline in the number of legal immigrants—a decline that is a big factor in all the things Americans dislike about how things are going right now. If an immigration advocate had wanted to concoct a scenario to demonstrate to Americans just how diminished their lives would be with fewer immigrants, they couldn't have devised a better scheme than the combination of the Trump administration and the pandemic.

Trump began his squeeze on immigrants in 2017 with a ban on immigration from seven Muslim-majority countries and followed up with drastic reductions in the number of green cards issued, the number of refugees admitted (a shameful policy choice) and the number of legal immigrants processed. A Government Accountability Office review found that the Citizenship and Immigration Service increased its processing time for immigration applications sixfold between 2015 and 2020. Trump officials threw sand into the gears. They raised fees for naturalization applications from $620 to $1,160 and added burdensome, niggling requirements. A 2019 rule, for example, forced immigrants to refile forms if they left a space blank, even if the question did not pertain to them. Interviews were stalled, and they starved the relevant agencies of funding.

Where is the outrage that we are turning away highly skilled immigrants who could make the difference in our competition with China? Wouldn't an "America first" policy capitalize on our desirability as a destination for the talented instead of slamming our doors? Wouldn't we be welcoming those who will create the key technologies for the future, like artificial intelligence?

Immigration enthusiasts—supporters of illegal immigration and Amnesty—are always surprised to see  arguments against legal immigration. I remember how freaked out John Podhoretz got when in 2007 he realized, after years of fighting actual conservatives over amnesty to make illegals legal, that there was an argument for lowering legal immigration as well. But of course that's what Peter Brimelow wrote Alien Nation about—it wasn't called Illegal Alien Nation.

Earlier on the subject of Mona Charen: