Immigrant Has Illegitimate Octuplets?—Who Are These People? 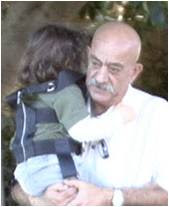 The California woman who gave birth to octuplets on Monday, although once married, apparently had all 14 of her kids out of wedlock by artificial means—and various public records raise questions about the family's ability to support them.

ABC News has learned through San Bernardino Superior Court Records that the 33-year-old California woman, whose name is Nadya Doud or Nadya Suleman (she filed to have her name changed to Nadya Suleman in 2001—though it was not clear if the request was granted), divorced her husband, Marcos Gutierrez, in January 2008.

Okay, "Doud" is both a British name (e.g., Ike's mother-in-law) and an Arab name. Since her father says he used to be an Iraqi military man and that he was born in Iraq, I'm assuming that it's Arab. The grandfather is very Iraqi-looking.

Gutierrez is a Hispanic name.

Whittier, where Angela lives with her parents, is now the suburb of choice in the LA area for affluent Mexican-Americans.

The document indicates "no children of the marriage," suggesting that Gutierrez was not the father of Doud's previous six children.

Meanwhile, the woman's mother, Angela Suleman, said her daughter has been obsessed with having children since she was a teenager, according to an interview she conducted late Friday with The Associated Press.

"Angela" sounds Christian, so I'm guessing Assyrian Iraqi Christian. Or maybe Angela is Hispanic and she married an Arab? Kind of a longshot, but you couldn't rule it out—like Salma Hayek, who is half-Arab, half-Mexican.

Angela Suleman told the AP that all 14 children were conceived through in vitro fertilization, because her daughter had always had trouble conceiving because her fallopian tubes were "plugged up.'' She said that while all the kids came from a single sperm donor, the donor is not Marcos Guitierrez.

An AP review of birth records identified a David Solomon as the father of the oldest four children.

Could it be that "David Solomon" used to be "David Suleman?" And then these octuplets could be the product of Iraqi cousin conceptions! Which might bring about the Grand Convergence of iSteve Obsessions, causing the universe to begin imploding upon itself, the purpose of its existence fulfilled.

Doud lived with Gutierrez for about three-and-a-half years from August 1996 until January 2000, when she moved back with her parents, Edward Doud Suleman and Angela Suleman, living at several addresses, records show. The parents were granted a divorce in Las Vegas in 1999, but evidently still live together.

What happens in Vegas, stays in Vegas.

You got to give Mr. Gutierrez credit for having the brains to bail out before the craziness got a full head of steam.

After leaving Gutierrez, Doud began having her 14 children.

Another set of court documents may raise the question of whether Doud will be able to afford care for all those kids. The public records indicate that Doud's mother filed for bankruptcy in March 2008.

The family currently lives in a three-bedroom home in suburban Los Angeles. Bankruptcy court records show that, as of March 2008, the family owned a second home in the same area.

As of March, Edward Doud Suleman, apparently the octuplets' grandfather, was working in Iraq, according to the bankruptcy filing. The couple's combined monthly income was listed as roughly $8,740, but the filing indicated that Angela Suleman expected their income would rise from her husband's employment. It said that he would earn $100,000 a year. The document did not specify Suleman's husband's occupation, but Suleman told the Los Angeles Times that her husband was a contractor.

The LA Times says grandpa is in Iraq working as a translator, which fits with his being an Iraqi native.

Meanwhile, the New York Times Magazine has an article by Emily Bazelon about how wonderful it is that so many more college-educated women are choosing to be single mothers: "2 Kids + 0 Husbands = Family."

No, that's just the oldest Stupid Journalist Trick in the book—you take something that's fairly rare and announce that it went up an amazing umpty-ump percent. Journalists just have to be clever enough, though, not to take it too far and say things like, "Since 2000, the number of Chinese players in the NBA has increased infinity percent!" Judging from the statistics above, college-educated women made up only 6.6% of all women having a first birth out of wedlock in 2005, which isn't much.

Fortunately, Nadya Suleman has a college degree, so everything is presumably copacetic. From ABC News:

Records show that Nadya Suleman (a.k.a. Doud) held a psychiatric technician's license, though it was not clear if she was currently employed. She holds a 2006 degree in child and adolescent development from California State University, Fullerton, and as late as last spring she was studying for a master's degree in counseling, college spokeswoman Paula Selleck told the Long Beach Press-Telegram.