Don't think it's only gazillions of annoying Mexicans who are laboring to destroy America's borders and sovereignty — illegal alien Irish may have fewer overall numbers, but they are organized, loud and have matching T-shirts.

The San Francisco contingent of illegal Irish assembled last week at the Irish Cultural Center for a political organizing session around illegal alien amnesty, with elected Democrats and their representatives attending and offering support. (See the Irish Lobby for Immigration Reform and the Irish Voices blog to read more cheerful advocacy for open borders.) 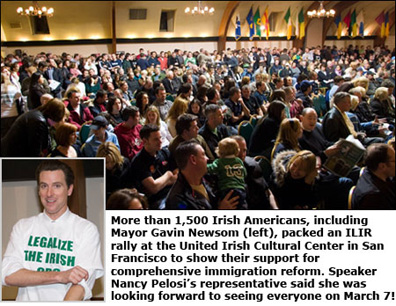 Celine Kennelly, director of San Francisco's Irish Immigration Pastoral Center, estimates that 50,000 of the country's 150,000 Irish-born residents are illegal, with many thousands of them in the Bay Area. Most of them entered the country on a legitimate student, work or tourist visa and stayed after it expired.

"The immigration system absolutely needs to be fixed," said Kennelly. The undocumented Irish "have employed people, they've paid taxes, they've contributed favorably to society, they've tried every visa option and entered the 'green card' lottery every year. But it's becoming impossible to live here without a Social Security number and a driver's license. It's a pressured situation." [Irish make their presence felt in fight over illegal immigration, San Francisco Chronicle 2/09/07]

One out of every three Irish residing in the US is a lawbreaking border buster? Who knew?! That charming brogue suddenly sounds less appealing when it's whining that the Irish are too Special to follow American immigration law.

According to a friend of borders who attended the meeting, ILIR co-founder and vice-chair Ciaran Staunton stated, "Someone told you, you wouldn't get a job without a Social Security number. You made one up. You got your job." [Here's an audio clip of the statement.] Giving instructions on how to break the law is not exactly kosher. Why didn't Speaker Nancy Pelosi's representative object?