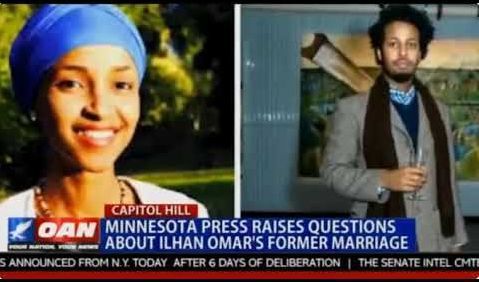 From the Minneapolis Star-Tribune:

Although she has legally corrected the discrepancy, she has declined to say anything about how or why it happened.
By J. Patrick Coolican and Stephen Montemayor Star Tribune JUNE 22, 2019

New investigative documents released by a state agency have given fresh life to lingering questions about the marital history of Rep. Ilhan Omar and whether she once married a man — possibly her own brother — to skirt immigration laws.

Omar has denied the allegations in the past, dismissing them as “baseless rumors” first raised in an online Somali politics forum and championed by conservative bloggers during her 2016 campaign for the Minnesota House. But she said little then or since about Ahmed Nur Said Elmi, the former husband who swept into her life in 2009 before a 2011 separation.

The questions surfaced again this month in a state probe of campaign finance violations showing that Omar filed federal taxes in 2014 and 2015 with her current husband, Ahmed Hirsi, while she was still legally married to but separated from Elmi.

Although she has legally corrected the discrepancy, she has declined to say anything about how or why it happened.

The new documents also detail the Omar campaign’s efforts to keep the story of her marriage to Elmi out of the press, arguing that detailed coverage would legitimize the accusations and invade her privacy.

Since the recent findings of the campaign finance board that discovered Omar had improperly used campaign money to pay a lawyer to fix her tax filings, the Star Tribune searched public records — including available databases, the marriage and divorce filing, business licenses, university records and other documents — and could find little publicly available information about Elmi. The search of records could neither conclusively confirm nor rebut the allegation that he is Omar’s sibling.

Sent a list of questions and a request to talk to her siblings and father, Omar declined to do so. Hirsi did not reply to multiple calls, texts and e-mails. Social media posts indicate Elmi is in Africa. He did not respond to multiple e-mails.

Omar’s reticence is consistent with near total silence she has maintained for three years amid questions raised through public records picked over by conservative opinion journalists intent on proving that she committed immigration fraud. Those attacks, she once tweeted, are the provenance of “fake journalists on bigoted blogs.”

Omar spokesman Jeremy Slevin issued a statement Friday asserting that the questions about her personal life are illegitimate:

“Since before she was elected to office, Ilhan has been the subject of conspiracy theories and false accusations about her personal life. Emboldened by a president who openly treats immigrants, refugees and Muslims as invaders, these attacks often stem from the presumption that Ilhan — like others who share those identities — is somehow illegitimate or not fully American.

“Ilhan has shared more than most public officials ever do about the details of her personal life — even when it is personally painful,” he continued. “Whether by colluding with right-wing outlets to go after Muslim elected officials or hounding family members, legitimate media outlets have a responsibility not to fan the flames of hate. Continuing to do so is not only demeaning to Ilhan, but to her entire family.”

The questions have nevertheless persisted as a political threat over the years while the former war refugee from Somalia made history being elected to the Minnesota House and then winning a seat in Congress.

Her ascent as the nation’s first Somali-American lawmaker has won her global praise and given her an international platform to champion human rights, criticize Israel, and challenge the Trump administration’s immigration policies — positions that have drawn further ire and scrutiny from conservative critics.

Omar’s widely condemned statements about the influence of Israel and Jewish money in American politics have only upped the stakes for her critics, who are also often passionate defenders of the Israeli government.

Throughout it all, Omar’s public persona has been informed by her biography as a refugee overcoming racial and cultural barriers. Yet she has insisted on silence on some key details.

“It’s really strange, right, to prove a negative,” she told the Star Tribune in an interview in October, before she was elected to Congress. As for Elmi, she said, “If someone was asking me, do I have a brother by that name, I don’t. If someone was asking … are there court documents that are false … there is no truth to that.”

Beyond denying the provocative allegation that Elmi is her brother, Omar has shed little light on her married life, which began in 2002, when she wed Hirsi in their Muslim faith tradition.

The Star Tribune has sought to authenticate some of the most egregious allegations, using public records and available social media posts, which make up the bulk of the case against her.

Some of the original social media accounts linking Elmi to Omar after their split in 2011 appear to have been removed, and documents verifying the family relationships of refugees from war-torn countries with limited government record-keeping are notoriously hard to obtain, even by U.S. immigration authorities.

Omar declined to make her tax and immigration records available for this report.

As George W. Bush would say:

When I was the governor of Texas I used to say family values did not stop at the Rio Grande River. People are coming here to put food on the table, and they’re doing jobs Americans are not doing.

Are your family values strong enough to marry a sibling for immigration fraud purposes?

I didn’t think so.