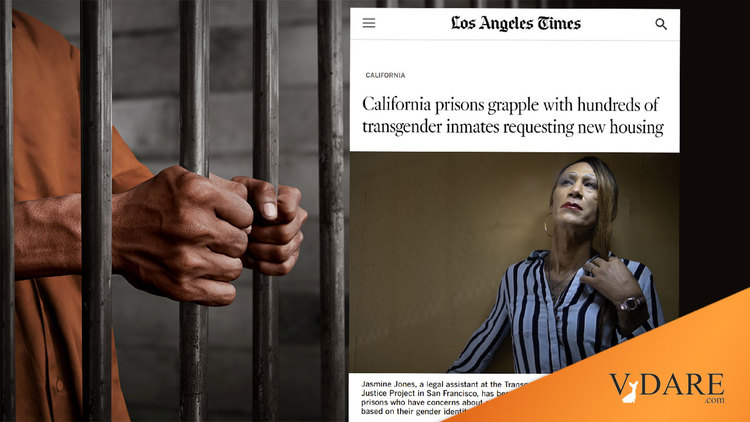 If You Are A Woman In California, Whatever You Do, Stay Out Of Prison

Kelly Blackwell longs to escape her life as a transgender woman in a California men’s prison, where she struggles every day to avoid being seen in her bra and panties and says she once faced discipline after fighting back when an inmate in her cell asked for oral sex.

After more than 30 years, and two decades since Blackwell began hormone therapy, her chance to leave arrived last fall when groundbreaking legislation gave transgender, intersex and nonbinary inmates the right, regardless of anatomy, to choose whether to be housed in a male or female prison.

What exactly did Blackwell do to get more than 30 years in the pen?

The demand has been high, with 261 requests for transfers since SB 132 took effect Jan. 1, according to the California Department of Corrections and Rehabilitation. It’s the start of a hugely sensitive operation playing out in one of the largest prison systems in the country.

But more than two hours away, at the Central California Women’s Facility in Chowchilla, there’s fear. Inmates say guards have warned them that “men are coming” and to expect sexual violence.

Just over 1% of California’s prison population — or 1,129 inmates — have identified as nonbinary, intersex or transgender, according to the corrections department, populations that experience excessive violence in prison. A 2007 UC Irvine study that included interviews with 39 transgender inmates found that the rate of sexual assault is 13 times higher for transgender people, with 59% reporting experiencing such encounters.

So far, the prison system has transferred four inmates to the Chowchilla women’s prison, approved 21 gender-based housing requests and denied none. Of the 261 requests, all but six asked to be housed at a women’s facility. …

Some prisoners are also concerned that inmates are making false claims about their gender identity in order to transfer to women’s prisons and say staffers have told them that this has slowed the process.

In recent years, Connecticut and Massachusetts have passed similar legislation as the California law, which also gives inmates the right to be searched and addressed based on their gender identity. The laws help put states in line with the federal Prison Rape Elimination Act, or PREA, which prohibits housing decisions based solely on an inmate’s genitalia and requires agencies to consider on a case-by-case basis whether a placement would ensure an inmate’s health and safety. Despite PREA, advocates say that it’s rare for transgender inmates to be relocated.

So the way the Prison Rape Elimination Act is playing out is to facilitate the transfer of People of Penis to women’s prisons?

Michelle Calvin said inmates welcomed her with care packages when she transferred in February from Mule Creek to the Chowchilla prison. But there was also tension. Inmates in two rooms refused to have her as a roommate. …

Johnson, the inmate who said staffers had told her to expect violence with the transfers, said that she has survived domestic violence from a man and that it would be triggering to live with transgender people who haven’t had gender-affirming surgery.

“I do think they should be safe, but it infringes on my right to be safe as well,” she said.

Yeah, but you are just a black woman prisoner, and so you are lower on the Diversity Pokemon Points Pyramid than a transgender Person of Penis murderer.