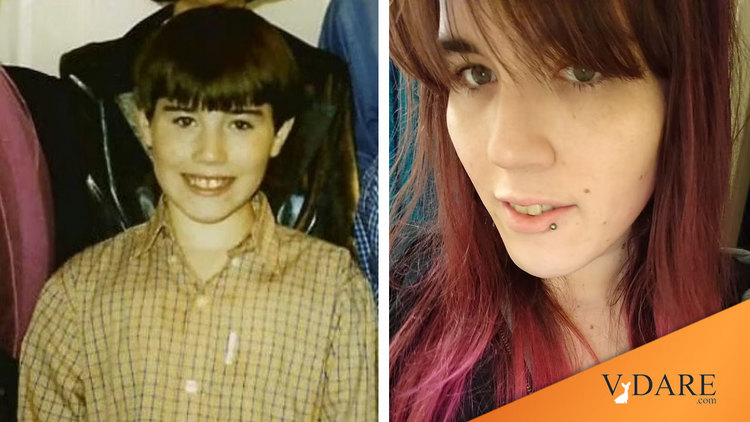 Big news: a major defeat for the poison-mutilate-sterilize brigades in Britain. From the Daily Mail:

The NHS’s controversial child transgender clinic will shut its doors after a damning report found it was ‘not safe’ for children.

The gender identity service at Tavistock & Portman NHS Foundation Trust will be replaced by regional centres at existing children’s hospitals, which will provide more holistic care with ‘strong links to mental health services’.

This is following the lead of the Swedish and Finnish authorities who figured out that the huge surge in recent years of unhappy adolescent girls suddenly claiming to be boys after a dozen years pre-puberty as normal girls should be treated more with run of the mill mental health therapy for depression, autism, anxiety and similar teenage girl problems rather than with the poison, mutilate, and sterilize American trans orthodoxy.

It comes in response to an ongoing review led by senior paediatrician Dr Hilary Cass, who warned the gender clinic was ‘not a safe or viable long-term option’.

She found other mental health issues were ‘overshadowed’ in favour of gender identity issues when children were referred to Tavistock’s Gender Identity Development Service (GIDS).

The clinic has been accused of rushing children onto puberty blocking drugs by former patients who feel they weren’t challenged enough.

Dr Cass has called for ‘rapid’ research on the use of the drugs after she found ‘insufficient evidence’ on their benefits.

A follow-up article from the Daily Mail:

Courage of the parents, patients and whistleblowers who refused to be silenced is revealed as controversial Tavistock children’s transgender clinic is to SHUT after damning report warned it was ‘not safe’

Patients, parents and even the Tavistock’s own staff turned whistleblower

Role played by whistleblowers was hailed by gender-critical campaigners online

By MARTIN BECKFORD POLICY EDITOR FOR THE DAILY MAIL

And an op-ed in the Daily Mail:

This could become the biggest medical scandal of the century

On the other hand, the New York Times’ coverage is nuanced to the point of tedium to keep subscribers from wondering if they’d been misled over the last nine years.

The National Health Service is closing England’s sole youth gender clinic, which had been criticized for long wait times and inadequate services.

From the headline and subhed, naive NYT readers (i.e., most of them) would get the impression that the problem is not enough gender-affirming care (i.e., not enough poison-mutilate-sterilize).

The National Health Service in England announced on Thursday that it was shutting down the country’s only youth gender clinic in favor of a more distributed and comprehensive network of medical care for adolescents seeking hormones and other gender treatments.

The closure followed an external review of the Tavistock clinic in London, which has served thousands of transgender patients since the 1990s. The review, which is ongoing, has raised several concerns, including about long wait times, insufficient mental health support and the surging number of young people seeking gender treatments.

Obviously, British youth need more, more, more gender treatments. Or that’s the impression NYT readers would likely take away if they didn’t read carefully to the end of the article.

The overhaul of services for transgender young people in England is part of a notable shift in medical practice across some European countries with nationalized health care systems. Some doctors there are concerned about the increase in numbers as well as the dearth of data on long-term safety and outcomes of medical transitions.

In the United States, doctors specializing in gender care for adolescents have mixed feelings about the reforms in Europe. Although many agree that more comprehensive health care for transgender youth is badly needed,

It will take the NYT a long time to explain that “more comprehensive health care for transgender youth” means doctors brave enough to tell unhappy adolescent girls that they are not transgender youths, but instead are girls who have other problems like depression or autism.

as are more studies of the treatments, they worry that the changes will fuel the growing political movement in some states to ban such care entirely.

“How do we draw the line so that we keep care individualized while maintaining safety standards for everyone? That’s what we’re trying to sort out,” said Dr. Marci Bowers, a gynecologic and reconstructive surgeon and the incoming president of the World Professional Association for Transgender Health, who is transgender.

Clearly, a wholly disinterested expert. If you can’t trust somebody whose bank account depends upon doing more sex mutilation operations, who is head of the main sex mutilation lobby, and who is, presumably, a mutilee, then who can you trust?

“It’s the people on the ground who need to make these decisions, not people in Washington or state legislatures.”

The people down in the muck profiting from poison-sterilize-mutilate haven’t covered themselves in glory, so far, have they?

The N.H.S. said current patients at the Tavistock clinic could continue to receive care there before transferring to two new hubs at children’s hospitals in London and Manchester. The new clinics will expand the country’s gender services while making sure children are adequately treated for autism, trauma and mental health issues. The specialists will also carry out clinical research on gender medications.

If you aren’t already cynical about the trans fad, you probably won’t figure out what is happening from this boring description.

There are “critically important unanswered questions” about the use of puberty blockers, wrote Dr. Hilary Cass, head of the external review of the country’s youth gender identity services, in a letter to the head of N.H.S. England last week.

Puberty blockers, which are largely reversible

Largely, I tell you, they are LARGELY REVERSIBLE.

Puberty blockers are poisons to stop children from developing naturally.

But Dr. Cass questioned whether most adolescents prescribed these drugs were given the support to reverse course, should they choose to.

Tavistock received more than 5,000 patient referrals in 2021, up from just 250 in 2011. The types of patients seeking referrals have also shifted over the past decade. When the clinic opened, it primarily served children who were assigned male at birth. Last year, two-thirds of its patients were assigned female at birth.

It is unclear why the number of patients has surged so drastically or why transgender boys are driving the increase.

It’s a total mystery. Whatever it is, it can‘t have anything to do with World War T, as promoted by the New York Times.

but emphasized that many questions still remained about how they would affect care for young people.

“We are optimistic, cautiously optimistic, about the news,” said Susie Green, chief executive of Mermaids, an advocacy group for transgender and gender-diverse youth. “There is a two-and-a-half-year waiting list to be seen for your first appointment. We’ve seen the distress caused to young people because of that.”

But Ms. Green, who has a transgender adult daughter, said the group was concerned about whether mental health services would be prioritized over medical care. Gender diversity, she said, should not be treated as a mental disorder.

It’s a higher state of being.

“We would not want any further barriers to be put in place in terms of access to medical intervention,” Ms. Green said.

In 2020, a former patient at Tavistock, Keira Bell, joined a highly publicized lawsuit against the clinic. She claimed that she was put on puberty blockers at 16 “after a series of superficial conversations with social workers,” and had her breasts removed at age 20, decisions she later regretted.

A high court initially ruled that children under 16 were unlikely to be mature enough to consent to such medical interventions. But that decision was reversed in September of last year, with judges ruling that “it was for clinicians rather than the court to decide” whether a young patient could provide informed consent.

Clinicians who get paid a lot more money if they say: “What do you know, this young patient can provide informed consent!”

In 2020, employees at Tavistock raised concerns about medical care at the clinic, prompting the N.H.S. to commission Dr. Cass, a pediatrician in London who was not affiliated with the clinic, for an external review. Her interim report was released in February of this year.

Sweden’s national health service determined this year that gender-related medical care for young people should only be provided in exceptional cases when children have clear distress over their gender, known as dysphoria. All adolescents who receive treatment will be required to be enrolled in clinical trials in order to collect more data on side effects and long-term outcomes. Finland took a similar stance last year.

“Our position is we cannot see this as just a rights issue,” Dr. Thomas Linden, director of the country’s National Board of Health and Welfare, said in a February interview. “We have to see patient safety and precision in the judgment. We have to be really to some degree sure that we are giving the right treatments to the right person.”

While these European countries have put some limits around transgender care, their approaches are far more permissive than those in some conservative U.S. states. A recent Alabama law made it a felony for doctors to prescribe puberty-blockers and hormones to minors. In Texas, parents who allow their children to receive gender treatments have been investigated for child abuse. Both states are tied up in court battles with civil rights groups.

Some American doctors worried that the changing standards in Europe would bolster the notion that gender treatments are dangerous for young people.

“My fear is that this is going to be interpreted as another notch against providing gender-affirming care for kids,” said Dr. Angela Goepferd, medical director of the Gender Health Program at Children’s Minnesota hospital. More services are needed, they said, not less. “That’s our challenge here.”

So, if you read carefully to the end, you’ll discover, if you are good at logic and reading between the lines, that Tavistock is being shut down not because it didn’t provide enough gruesome poison-mutilate-sterilize services but because it went hog-wild on the gender-affirming care scam.