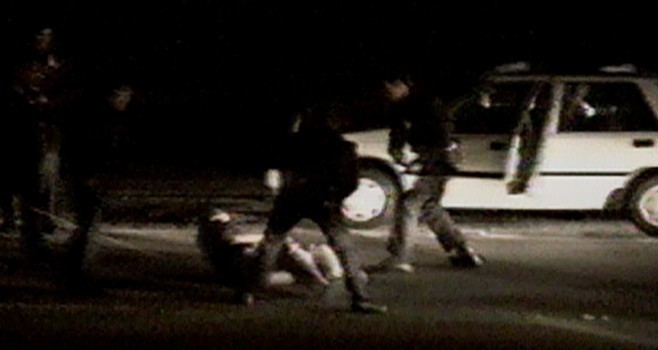 I may be the only person in North America who was sentient in 1991 yet didn't see the endlessly-replayed videotape of "Rodney King's beating by the LAPD."  (This was before the internet, and I essentially never watch TV.)

So in 1998, while reading Dennis Prager's collected essays  Think A Second Time

(1995, ReganBooks, New York), I found the chapter "Blacks, Liberals, and the Los Angeles Riots" highly educational.  Here's most of what Prager wrote about the events of that fateful evening, the immediate aftermath, and the 1992 trial of the four hapless police officers, transcribed from pp. 117 – 120 in the book.  (All the italics below are in Prager's original text.)

The Media and the Video

For over a year, Americans were shown again and again a frightening videotape of white police officers beating a black man.  Indeed, the sight was so shocking that the president of the United States remarked on national television that he was surprised by the not-guilty verdict.

No one who saw the few seconds of the video that were repeatedly shown could imagine an acquittal of any of the officers involved.

But those who saw what the news media refused to show, or watched the entire trial, or understood that overly harsh charges were brought against the policemen, had a far fuller understanding of what happened, and why the jury reached its verdict.  They saw a 230-pound, six-foot-three-inch man, with a 0.19 blood alcohol level (0.08 is legal intoxication), acting wildly and lunging at policemen, four of whom he actually threw off.

Those who saw this, or learned of it from the prosecution's eyewitnesses, understood that the policemen suspected that King was under the influence of the hallucinogenic drug PCP.  Like other PCP suspects, he could not be subdued by "tazing," the shooting of powerful electric shocks.  Even after being shot twice with the Taser gun, King still resisted being handcuffed.  He also put his hands on his buttocks and made obscene gestures at a female officer who had ordered him to stay still.

Only after their verbal orders had been ignored and "tazing" and other techniques had failed to subdue him, did the police use their batons to beat King.  And all this was after an eight-mile car chase at speeds up to one hundred miles an hour on a freeway, and eighty miles an hour through city streets.

It is almost impossible to overstate how responsible the media were for the rage over the Rodney King verdict.  Los Angeles and national news programs deliberately and repeatedly showed only the most brutal seconds of the tape, thus never providing viewers with a context.  It was as if all that Americans ever saw of the [post-trial] riots were pictures of Korean-Americans armed and shooting.

Yet when confronted with this prejudiced, inflammatory use of the Rodney King tape, Stephen Wasserman, the executive vice president of ABC News, dismissed the issue, saying, "The part of the tape not regularly shown does not shed light on the jury's action, one way or the other."

Fair-minded people of all political persuasions who have seen the full tape know that statement is false.  Indeed, Roger Parloff, a Democratic attorney and senior journalist for American Lawyer concluded after viewing the entire tape that he "might have done the same thing the jury did."  He ended his article with these words: "I can't remember a time when I have ever felt so hesitant to say what I believe ... And I am terrified at the prospect of quotation out of context.  After all, imagine if the media were to summarize my article the way it summarized the trial."

Yet the New York Times and other leading newspapers, whenever discussing the incident, always referred to King as "the black motorist Rodney King," as if white police were looking for an innocent black motorist to beat up.

Rodney King was anything but an innocent "black motorist."  In 1989, he was arrested for armed robbery and served nine months in state prison.  He was a felon on parole when the chase occurred.  He knew that, had he been caught, he would have been reincarcerated, which is why he drove at life-threatening speeds.

Had King been described even half the time as "the paroled armed robber who had just eluded police in a hundred-mile-per-hour car chase," passions might not have been nearly as stirred up.  Certainly, had news organizations shown more of the tape, the incident would never have engendered as much rage as it did.

None of this is to say that the police did no wrong.  It seems obvious that excessive force was used.  Indeed, the jury did not acquit Officer Laurence Powell, who administered nearly all the blows that struck Rodney King.  Nevertheless, since the prosecution sought conviction on much more serious charges than excessive force, the jury was not prepared to register a guilty verdict that would have necessitated severe punishment.

In any event, the officers were punished.  In addition to their legal fees, public humiliation, and personal and family tensions, the rookie officer involved was summarily dismissed from the police force, two of the three veterans were relieved of duty without pay and after a second trial were sent to jail.  Compare their punishment with Rodney King's nine months in prison for armed robbery.

The charge of racism made in the Rodney King incident may be true in some instances, but it was probably a smear in the case of at least one of the officers involved, Stacey Koon.  A few months prior to the King beating, Officer Koon, to the amazement of onlookers, applied mouth-to-mouth resuscitation to a dying black transvestite prostitute who had open sores on his mouth.  Why didn't we hear about this on local and national newscasts?

Moreover, if racism, rather than Rodney King's violent behavior, caused the police officers' beating of him, why did the officers do virtually nothing to King's two black companions who obeyed police instructions?

I take issue with Prager on one point: I think his conclusion that the police used excessive force is an unwarranted concession, since I think we expect too much from police regarding the suppression of their own emotions in cases of high stress because of enormous provocation, as if they're not allowed to be human.

The further point to add is that Rodney King was at least a bum if not actually an intrinsically violent thug.  He collected a several-million-dollar settlement from the City of Los Angeles and, besides swiftly pissing it away, had continuing scrapes with the law, including ones due to domestic violence.