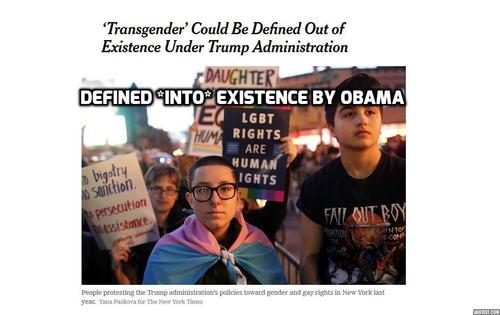 How Big A Role Did Obama Administration Play In Rise In Mental Illness?

‘Transgender’ Could Be Defined Out of Existence Under Trump Administration

WASHINGTON — The Trump administration is considering narrowly defining gender as a biological, immutable condition determined by genitalia at birth, the most drastic move yet in a governmentwide effort to roll back recognition and protections of transgender people under federal civil rights law.

One of the really interesting historical questions is the cause of the apparent rise in mental illness during the Late Obama Age Collapse. The new book by Jonathan Haidt and Greg Lukianoff called The Coddling of the American Mind reports an increase in self-reported “psychological disorders” among college students of about 140% from 2012 to 2016. That’s so extraordinary that I’m not sure I believe it. On the other hand, glancing through my old weekly Taki’s columns, it indeed looks like some kind of national nervous breakdown got going in 2013.

A series of decisions by the Obama administration loosened the legal concept of gender in federal programs, including in education and health care, recognizing gender largely as an individual’s choice and not determined by the sex assigned at birth. The policy prompted fights over bathrooms, dormitories, single-sex programs and other arenas where gender was once seen as a simple concept. Conservatives, especially evangelical Christians, were incensed.

Now the Department of Health and Human Services is spearheading an effort to establish a legal definition of sex under Title IX, the federal civil rights law that bans gender discrimination in education programs that receive government financial assistance, according to a memo obtained by The New York Times.

The department argued in its memo that key government agencies needed to adopt an explicit and uniform definition of gender as determined “on a biological basis that is clear, grounded in science, objective and administrable.” The agency’s proposed definition would define sex as either male or female, unchangeable, and determined by the genitals that a person is born with, according to a draft reviewed by The Times. Any dispute about one’s sex would have to be clarified using genetic testing.

A genetic test proved that Senator Warren was an American Indian but you can’t use genetic tests to figure out which sex somebody is.