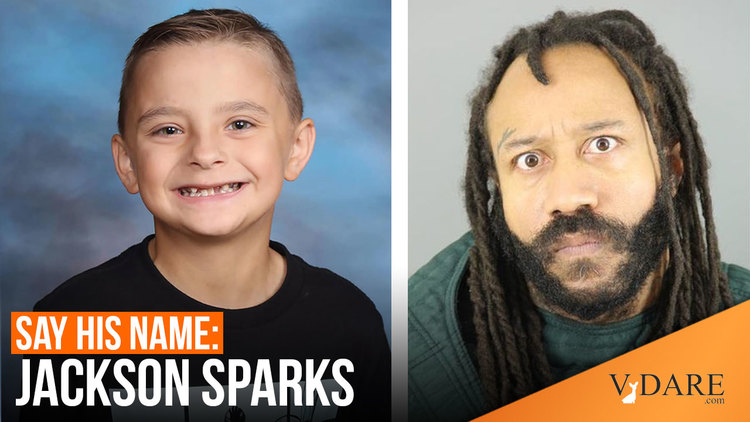 His Name Is Jackson Sparks: White 8-Year-Old Is The 6th Victim Of The Anti-White Terror Attack In Waukesha, WI By Black Lives Matter Activist

Their lives matter too.

These are the four white female, and one male, victims of the anti-white attack in Waukesha perpetrated by Black Lives Matter activist Darrell Brooks, a black man who had a history of posting racial vitriol against Caucasians on social media.

Brooks was charged on Tuesday with five counts of first-degree intentional homicide and is expected to face more charges.

Police are yet to determine the motive behind the deadly rampage, however, records reveal Brooks is a career criminal with a rap sheet dating back to 1999 and had been bailed twice this year.

Facebook posts also show the amateur rapper, who went by his stage name, MathBoi Fly, had shared a series of links and memes relating to race and white privilege in June 2020, when protests erupted over the death of George Floyd.

Five of the six victims – all white – who died on Sunday were aged 52 to 82 and part of a Waukesha club known as the Dancing Grannies.

He also shared an article from ESPN that same day about NBA player Kyle Kuzma breaking down ‘his belief of what white privilege’, to which Brooks commented: ‘interesting’.

Brooks had also shared a post about a white cop being ‘violent towards peaceful protestors’, six days earlier.

The posts are among several that have emerged in the wake of his arrest after he allegedly drove his red Ford SUV in a crowd of kids and elderly dancing groups during a Christmas parade in the Milwaukee suburb.

Brooks’s troubling track record has raised questions about his alleged motives for the killings and why he had been allowed on the streets.

Among the brow-raising social media posts that surfaced on Tuesday was a meme about Adolf Hitler and the identity of the ‘real Jews’.

The graphic – posted on November 2015 – claimed negros are ‘the true Hebrews’ and that America had moved ‘false white Jews into a state of Israel’.

The post seemed to promote the views of the Black Hebrew Israelites who believe African Americans are literal descendants of the Israelites in the Bible.

Brooks had shared the meme with a caption ‘#research’ and commented: ‘real game rite here’.

Brooks made his initial appearance in court Tuesday. He could be heard crying during the proceeding, leaning over with his head nearly in his lap, with his attorney resting a hand on his back.

More than 40+ other white people were hit by Brooks as he drove an SUV through the Christmas parade in an anti-white terrorist attack the corporate media has completely abandoned covering or investigating the true motives behind what compelled the African-America Black Lives Matter activist to apparently target white people with his vehicle (though he has a long history of espousing violence against whites).

There was an anti-white terrorist attack by a black nationalist, sympathetic to Black Lives Matter, that resulted in a mass casualty event.

There was an anti-white terrorist attack by a black nationalist, sympathetic to Black Lives Matter, that resulted in a mass casualty event. As of 11/26/21, nine white children remain hospitalized.

Unfortunately, we now have six victims from this anti-white terrorist attack by a black nationalist, sympathetic to Black Lives Matter.

His name is Jackson Sparks.

An 8-year-old boy injured in the Waukesha Holiday Parade tragedy has died. This, according to a GoFundMe page.

Eight-year-old Jackson Sparks, along with his 12-year-old brother, were both seriously hurt after a driver plowed through the Christmas parade Sunday, Nov. 21.

Both boys were taken to Children’s Wisconsin for treatment.

According to the GoFundMe page, Jackson underwent brain surgery following the incident. Tuesday, Nov. 23, an update said Jackson succumbed to his injuries and passed away.

The family is asking for privacy at this time.

“Please know that they appreciate your continued prayers and tremendous outpouring of support for their family. They do however ask for privacy at this time to allow Tucker to continue to heal physically and their family to heal and mourn the tremendous loss of their sweet little boy who is now under the care of Jesus.”Five other people were killed during the parade tragedy, ranging in age from 52-81. Jackson will be the youngest victim added to the list — bringing the total to six.

Jackson was marching in the parade with his Little League team, the Waukesha Blazers.

The president of the team, Jeff Rogers, released a statement saying, “Jackson was a sweet, talented boy who was a joy to coach. He was an awesome utility player and played on the Blazers Wolfpack team. Jackson was tender-hearted with a contagious smile. He was the little guy on the team that everyone supported. You couldn’t help but love him. We will continue to keep the Sparks family in our prayers.”

In 2021 America, the only type of interracial violence existing worthy media reporting is white on black. Never mind the biggest mass casualty event in the nation since the strange 2017 Las Vegas mass shooting being instigated by a black nationalist (who wrote about wishing to commit violence against whites) who targeted white people marching in a Christmas parade, for publicizing and investigating this terrorist attack would undermine the idea bigotry flows only from whites to blacks.

Jackson Sparks should be preparing for a visit from Santa Claus and enjoying the Christmas season with his family. He’s just another casualty of a massive anti-white terrorist attack we aren’t supposed to document, remember, or mourn.