Obviously, the three white males and one Asian male stabbed by on the campus of the University of Texas on May 1st were randomly selected, right?

Why else would a black male target white males, who make up roughly 1 of every 5 students on the campus? 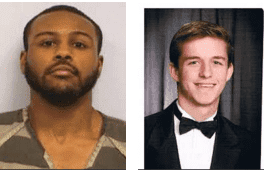 Harrison Brown, right, was murdered by Kendrex White on the campus of the University of Texas. Roughly 1 in 5 students at UT is a white male, with White targeting three white males to stab (with the fourth victim an Asian male)

In the heat of the attack, an Asian guy appears to white if the attacker doesn't see his face, right?

But the attacker had "mental issues" and had been committed before, so obviously the racial angle doesn't exist, right?

It's been reported Kendrex White, the black male behind the mass stabbing attack, once participated in reenacting The French Revolution of San Domingo (as everyone remembers the black revolution in Haiti, where all white people were targeted for extinction).

If any of this true—a racial element existing as the motive for White's targeting white males at the University of Texas—it won't matter, because "mental health issues" explain away the assault.

Man Wielding Knife Kills One and Injures Three at University of Texas, New York Times, May 1, 2017

A man killed one student and wounded three others on Monday at the University of Texas, walking calmly from one to another and stabbing them with a bowie knife, setting off panic and rumors of a larger wave of violence.

The university police identified the suspect as Kendrex J. White, a 21-year-old student who was quickly arrested. Witnesses described the suspect as eerily composed during the episode near Gregory Gymnasium, and said that when he was confronted by police officers, he did not speak or appear to hurry.

Rachel Prichett, 19, a student from Austin, said she was standing at a food truck when she heard screaming, turned and saw a man holding what looked like “a small machete” approaching her, “just walking calmly with the knife to his side.”

The suspect walked behind a man a few feet away from her, then grasped the man’s shoulder with one hand and with the other hand stabbed him in the back, thrusting the knife “all the way in.”

Ms. Prichett said she fled, running past another victim, his head bloody, who was slumped over a table.

In recent weeks, fraternity houses at the university had been vandalized with messages accusing them of promoting racism and rape. Many people on campus speculated Monday that the knife attack was related.

But Chief David Carter, of the University of Texas at Austin Police Department, said the authorities did not know of a motive for the stabbings. Speaking at a news conference, Chief Carter said that he was aware of the rumors but that he did not know if the victims, all men, were fraternity members.

Mr. White is black. Chief Carter said the four who were stabbed, all age 20 or 21, included three white men and one Asian-American man. One died at the scene, and the others were taken to the university medical center. The authorities did not immediately release the victims’ names.

School officials in Graham, Tex., identified the student who died as Harrison Brown, according to The Austin American-Statesman.

“Harrison was an inspiration to everyone around him,” the school said in a Facebook post. “We were blessed and honored to have known him.” Mr. Brown was a 2016 graduate of Graham High School. [More ]

Though two other white males were stabbed on a campus where only one in five students is white male, we are supposed to believe the black male attacker targeted Brown and his fellow white males randomly, all because of "mental health issues." His name is Harrison Brown, and he's yet another victim in a war whose aims aren't any different than the goals of The French Revolution in San Domingo.