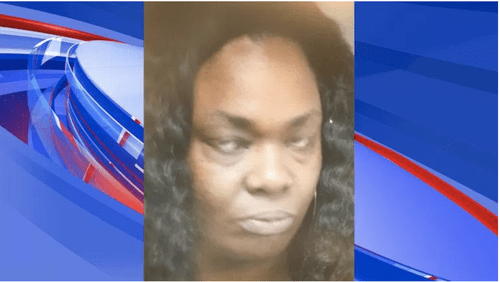 Her Name is Marybeth Gaeng: White Woman "Randomly" Stabbed to Death in St. Louis Family Dollar by Black Woman (Who Has a Lengthy Criminal History)

Marybeth Gaeng worked at The Gathering Now, as a Gathering Kids Nursery Specialist. She was a white woman of deep faith, a lifetime citizen of St. Louis and a devoted fan of the St. Louis Cardinals.

She entered a Family Dollar store to shop, a member of the white working-class mindful of her budget.

She would never the leave the store alive.

A black woman with a long history of anti-social behavior picked up a pair of scissors and stabbed Gaeng to death.

A Tennessee woman grabbed two knives from the shelf at a Family Dollar store here Tuesday and began stabbing a customer in the head, fatally wounding the victim.

Cameka Cathey, 34, of Memphis, was charged with first-degree murder and armed criminal action in the attack. She is accused of stabbing Marybeth Gaeng, 65, inside the Family Dollar Store at 9730 St. Charles Rock Road.

Police said the two were strangers.

“They did not know each other,” Police Chief John Griffin said. “There was no conversation, nothing, during that time. She just approached the victim and just started stabbing the victim in the face and the head area.”

Family Dollar stabbing suspect has long criminal history: "For the crimes she committed, if everybody was held for every crime that they commit, jails would be over populated, and people would be held needlessly.", KSDK.com, 11-30-18

It's often seen as a crime of passion, stabbing someone at arm's length repeatedly in the head. This case, however, is different. Police said Cameka Cathey, who just moved to St. Louis from Memphis did not know her victim.

And based on her lengthy criminal history, one of her victims thinks she should have been in jail, and not on the streets.

"It's a tragedy for the family, because the family is the one that's suffering right now," said Marvin Johnson, the owner of Mr. J's Auto Repair Center. "I'm not sure how she got out that quick that's the whole thing."

Johnson's shop in Breckenridge Hills. He said days before the deadly stabbing, Cathey broke into his store, swiped a pair of keys and got away with one of his cars."Anybody can break into someplace or whatever and get out the next day, I don't see how that works," said Johnson.

5 On Your Side found that Cathy's criminal history started long before she got to St. Louis.

It starts in August of 2003 and is mostly filled with non-violent violations like driving with a revoked license or failing to appear in court.

But there are some more serious charges.

Like in June 2013 when Cathey grabbed a sheriff's arm, scratched him and stated she was "HIV positive too.”

Or when, in that same month, she threatened a clerk at a Family Dollar in Memphis with a 12'' long butcher knife.

Even with a rap sheet as long as hers, detective Aimer said keeping her in jail is not so simple.

"For the crimes she committed, if everybody was held for every crime that they commit, jails would be over populated, and people would be held needlessly," said detective Aimer.

Police said the woman only said “OK” when they told her the victim died.

That of course changed when she was charged with the deadly stabbing of Marybeth Gaeng. Now she's locked up in the St. Louis County Jail without bond.

Marybeth Gaeng was a hardworking individual, a loving member of her church and entirely devoted to her family.

She was murdered in a store where she was only visiting to spend a few dollars, more than likely on toys or supplies for the children she watched as part of her job.

Few, oh so few, will mourn her in death. But she deserved better and in a Post-America nation, she's nothing more than another white murder victim (with a black suspect) few care to remember.