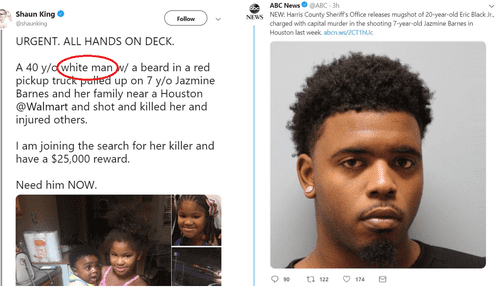 It appears that cops have cracked a murder case in Texas, The Washington Post reports, that the usual race hustlers have been retailing as an anti-black hate crime. [A family felt a black child’s killing was a hate crime. An arrest gave police a ‘new direction,’ by Michael Brice-Saddler, January 6, 2019]

When 7-year-old Jazmine Barnes was shot to death, two black leftists, anti-white Shaun King and "civil rights lawyer" Lee Merritt, offered $100,000 for the capture of the “'thin white man' in this 30s or 40s”  who supposedly shot the little girl.

But alas and alack, police have charged Eric Black Jr., 20, with capital murder. He is black. He has confessed. The second suspect cops collared, Larry Woodruffe, is also black. [Investigation into drive-by shooting of 7-year-old Jazimine Barnes has 'taken a new direction,' by Hanna Bogorowski, The Daily Caller, Jan. 6, 2019]

“We had at least four independent witnesses who believed the shooter in this situation was a white male,” race-hustler Merritt told the Post. “To learn that it wasn’t, isn’t disappointing, but it is surprising.”

B.S. Most blacks are murdered by other blacks. Particularly in drive-by shootings.

King and Merritt know it, too. I wonder who those "witnesses" were. Did they know the real suspects? Is this another hate hoax on par with the Michael Brown case? 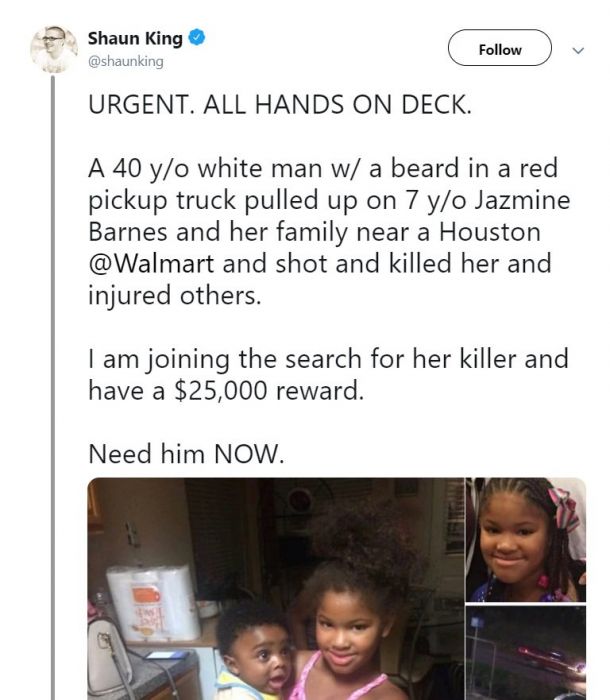 And don't believe the two aren't disappointed. Of course they are.

A 40 y/o white man w/ a beard in a red pickup truck pulled up on 7 y/o Jazmine Barnes and her family near a Houston @Walmart and shot and killed her and injured others.

I guess it's a good thing some black thugs didn't drag a “40 y/o white man w/ a beard” out of his “red pickup truck” and beat him to death.

Of course, it that had happened, nothing would have happened to King and Merritt.