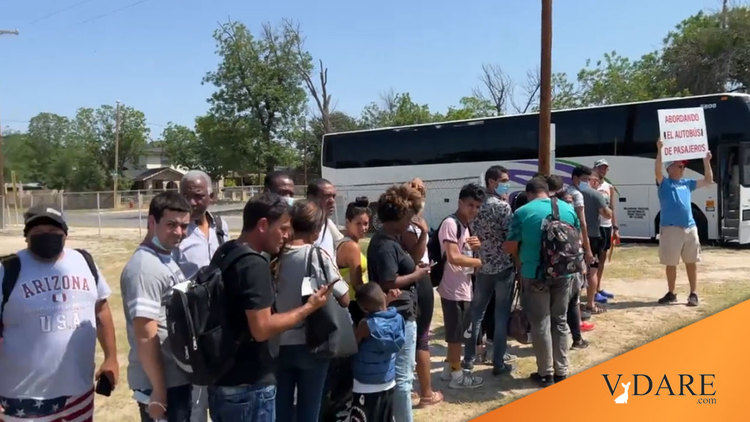 The Biden Regime is busing and flying illegal aliens into the heartland at breakneck speed seven days a week, Todd Bensman of the Center for Immigration Studies reported after he witnessed the treason at the scene of the crime—the U.S. border with Mexico [Border Conveyor Belt Continues, June 1, 2022].

Despite Title 42, thousands at the Southern border fill buses and planes headed for the interior.https://t.co/wNBMPpbEDK

A roaring, expanding conveyor belt of buses and airplanes is hauling thousands of previously expellable crossers … into American cities, out of ear shot or sight of the American public.

The buses and planes hauling illegals into the interior of the country “are not only spiking, but likely evidence of a border-wide development.” The illegals know they can stay, as an illegal named George told Bensman:

Asked if he thought America would let him stay in the country forever, George nodded with certainty and a tight-lipped knowing smile: “Yeah, forever. Because it’s a very good country, man ... really.”

As of mid-May, Biden had released more than 950,000 illegals since he took office. By now, that number might be more than 1 million.

Happy happy illegal aliens getting released from border into America. Here’s a view of the conveyor belt in Del Rio, Texas this morning. pic.twitter.com/xlNr7ZbksP