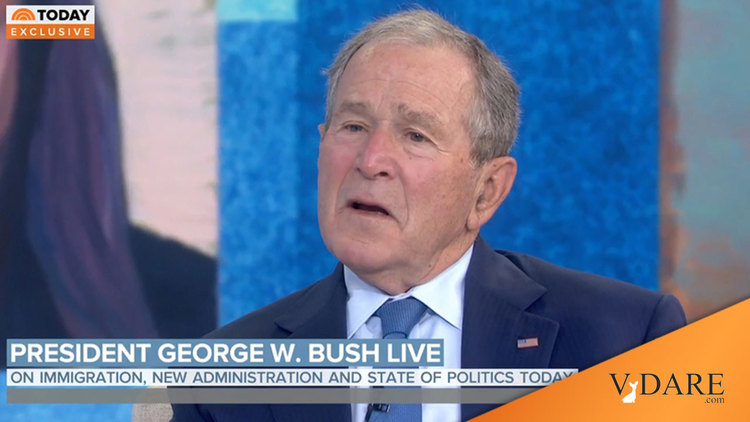 Words cannot describe the irreparable damage George W. Bush did to the Republican Party and the Historic American Nation by extension during his time as president. From his foreign policy blunders in Afghanistan and Iraq to his mass-migration boosting (which was thankfully derailed), Bush is the consummate globalist.

I not only welcomed his departure from the presidency but was ecstatic when Trump handily won the Republican primaries and defeated Hillary Clinton in the General Election—a resounding blow to the uniparty consensus that Bush embodied. Yes, the Trump administration had its flaws, but the unqualified good of the Trump presidency was its rejection of Bushism.

Unfortunately, Bush has recently been making rounds in the media and taking shots at Trumpian nationalism:

Ahead of a special election on Saturday to replace a Texas congressman who died after contracting Covid-19, former president George W Bush said the ascendancy of supporters of Donald Trump suggest Republicans “want to be extinct.”

Bush is promoting a new book, a collection of portraits and stories of immigrants. In an interview released on Friday by the Dispatch, an anti-Trump conservative podcast, he was asked about recent moves by pro-Trump extremists to form a congressional caucus promoting “Anglo-Saxon traditions”.

“To me that basically says that we want to be extinct,” he said.

If such trends continued, Bush said, in three to five years “there’s not going to be a party. I mean I read about that and I’m saying to myself, ‘Wow, these people need to read my book.’ And I mean, it’s like saying when I was running for governor of Texas, you’ll never get any Latino votes because you’re Republican. And I said you watch. And I worked hard.

The thing Bush and Republican dunces who think America’s freedoms are the product of ideas and principles don’t get is that WASPs are what made American great. Just think about it, if America had been fully settled by the Spanish or Portuguese and the slaves that accompanied them, America would likely transform into a Latin-style despotism [The Color of Corruption, by Gregory Hood, American Renaissance, April 12, 2018]. Similarly, had America been exclusively settled by Africans, the country would turn out to be a third world dumpster fire

For the likes of Bush, America is a shopping mall armed with a vast nuclear arsenal that must remake the world in America’s image, while the country is flooded with immigrants from cultures incompatible with the Historic American Nation. The Bush family’s oligarchical background and their business interests in countries like Mexico naturally make them huge boosters for mass migration, which explains Bush the Lesser’s continued immigration fanaticism.

Bush’s latest comments against those who want to preserve America’s ethnic stock should remind us why many Americans rejected his low-energy brother Jeb Bush during the Republican primaries and opted for a red-blooded American in Trump. A serious Republican Party would be one where all members of the Bush family and those who share similar globalist values would be treated as personas non grata.

Immigration patriots must brace themselves for all attempts by GOP commissars to reanimate zombie Bushism. Like cockroaches, these globalist pests have a nasty habit of resurfacing and making everyone’s lives miserable.