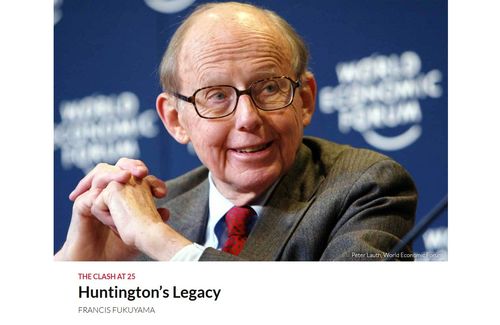 Fukuyama: Huntington Is Winning, Not Me

From the American Interest:

Samuel Huntington was not right about everything. Rather, his greatness lay in his ability to conceptualize big ideas in a wide variety of fields.

Since Samuel Huntington’s Clash of Civilizations has been contrasted with my own End of History in countless introductory International Relations classes over the past two decades, I might as well begin by tackling at the outset the issue of how we’re doing vis-à-vis one another. At the moment, it looks like Huntington is winning.

I reviewed the Fukuyama vs. Huntington question in 2011 in The American Conservative.

For example, a few hours before 9/11, Bill Clinton told some Australian business leaders that he believed in “the ultimate wisdom of a borderless world.”

What thinker was responsible for that? It’s often tougher to figure out who spread Conventional Wisdom than the ideas of fairly distinctive right-of-center thinkers like Fukuyama and Huntington.

I’m starting to think Mr. Borderlessness was a fellow who has been hiding in plain sight all these years as longtime president of the Brookings Institution: Bill Clinton’s Rhodes Scholar roommate Strobe Talbott.

Strobe, a distant cousin and bete noire of George W. Bush, wrote thunderous cover stories for Time in the 1980s explaining that Reagan’s policy toward the Soviets would prove catastrophic. When that didn’t exactly come true, Bill Clinton made him #2 in the State Department. Then he ran the Establishment Brookings Institution until a couple of years ago. Strobe’s father-in-law was gossip columnist Lloyd Shearer, who was kind of the Roger Stone of the Democrats.

Talbott would be a boring choice as the mastermind behind What Went Wrong, but the Talbott–>Bill–>Hillary–>Everybody Who Is Anybody pathway sounds plausible.