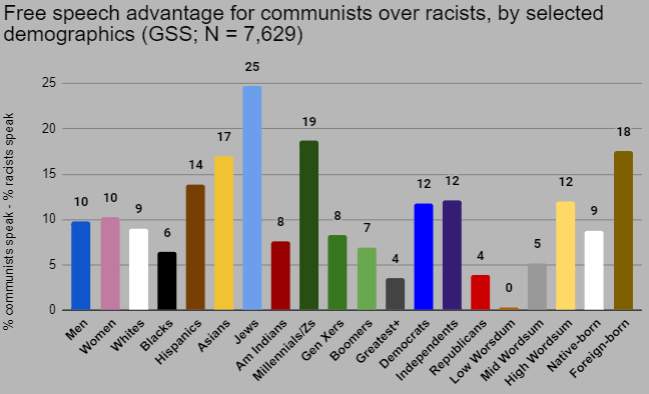 Free Speech For Racists And Commies By Demographic The racial/ethnic categories are mutually exclusive (i.e., whites are non-Jewish, American Indians are non-Hispanic, etc.). To avoid language fluency issues, Wordsum buckets are restricted to survey respondents born in the US.

This characterization of racism is about as unflattering as it gets. Instead of asking about racism in general, let alone something sober like “do you believe human racial groups differ biologically on average?,” the framing concerns a hypothetical “person who believes blacks are genetically inferior.” This is a serious abstract test of tolerance for words one finds offensive.

Higher intelligence and having been born in the US are the two strongest indicators of support for free speech.

The same, this time for communists: Tolerance of the two boogeymen together: Note there is no group more accepting of free speech for racists than for communists. Those of modest intelligence come close but tolerance of communist speech is still marginally higher. The gaps are not the same, however, and they offer some insight into the cultural and political dynamics of the day: If he were a racist, they’d be throwing rocks instead of fruit: