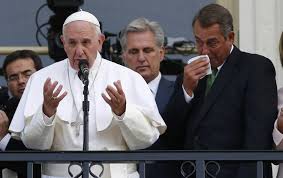 Francis' Speech To Congress: Is The Pope Catholic? Or Just Silly And Stupid?

A Catholic friend writes of Pope Francis's address to Congress:

No mention of abortion. No affirmation of the sacrament of marriage. No mention for the name of Jesus...Affirmation of "family life," but he knows very well that that can be made to mean anything.

That is odd when you think about it. Is the Pope Catholic?

Personally, I think that Martin Luther King cannot be regarded as a universal American hero for reasons that I laid out here, although the Pope can hardly be blamed for invoking him.  However, the Pope can be blamed for invoking Dorothy Day if this gloating Daily Beast headline anything like correct: Pope Name-Drops Dorothy Day in Congress: The Socialist, Pacifist, Catholic Who Had an Abortion (by Betsy Woodruff, September 24, 2015).

On the questions that directly concern VDARE.com, of immigration and the "refugee" influx, the Pope's comments were silly and stupid. He did not even mention the word "illegal" or the obvious fact that the "refugee" influx is economic opportunism that threatens the cultural existence of what used to be called Christendom. Remember Christendom?

Was Speaker Boehner was crying during the Pope's address because he realized it was a mistake to invite him?