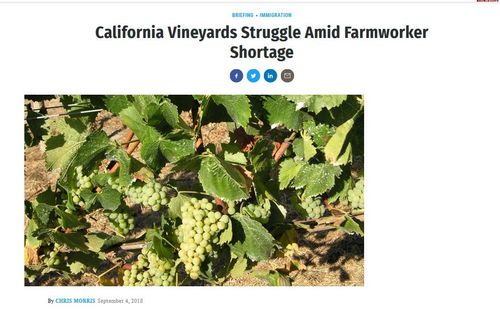 FORTUNE: Varietals Are Rotting on the Vine!

It’s September, so it’s time for the X Is Rotting in the Y headlines that growers’ PR firms and lobbyists have saved as Word macros. From Fortune:

The ongoing battle over immigration could hit wine lovers in the wallet as many California vineyards are struggling to find seasonal workers to assist with harvesting the 2018 crop.

Wine makers face a perfect storm of problems regarding the issue: The ongoing battle about U.S. immigration policies and competition from other higher-paying, local industries, such as construction, which are helping the area recover from last year’s wildfires. …

Vineyards hoping to bring in migrant workers from Mexico must use a federal program known as the H-2A Visa, which requires, among other things, that they provide seasonal housing and transportation from Mexico. Not every winery is equipped to house that additional staff.

To make the jobs more attractive to both locals and seasonal workers who are being wooed by construction companies, which can offer year-round pay, vineyards are increasing their wages during harvest to as much as $30 per hour. (Pay rates for the rest of the year have gone up as well.) …

Changing immigration policies have caused farmer angst throughout California for more than a year. In 2017, crops were left rotting on the vine as a shortage of migrant workers impacted the year’s vegetable harvest.

Which set off the Cabernet Sauvignon Famine of 2017-18 that left millions starving, or at least might eventually force some to switch to to drinking … Merlot when the vintage begins to mature in the 2020s.