Islam’s unique diversity has penetrated Florida with plans of local Muslim residents to slaughter animals in the traditional celebration of Eid al-Adha, but there was a kink. The original idea was to kill some lambs for Allah out in an open field, but that hit a roadblock when a local official nixed the plan. (See details in the Daily Mail’s Muslims banned from slitting throat of sacrificial lamb during religious festival in Florida field (but they vow to do it anyway).)

Nothing says celebration in Islam like bloody slaughter, particularly with throat slitting.

Below, Eid al-Adha (Festival of Sacrifice) is celebrated in Egypt by street slaughter of sheep, goats and other animals. Fun for the whole family! 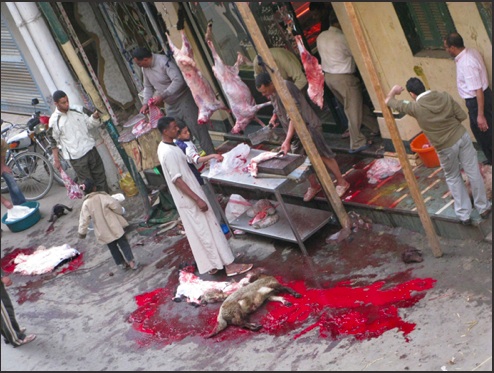 There was a change in plans for the Muslim celebrants in Florida, however; the ruckus convinced them to remove their critter head-chop to a private venue. Good. The practice is not suitable for Western standards of public sanitation or animal welfare. Muslims like to claim that do-it-yourself slaughter is not cruel, but evidence indicates otherwise.

After dramatic scenes of roadside ritual animal sacrifice during last year’s Eid, which shocked feint-hearted passers by, the Moscow city government has ordered Muslims to restrict their activities to slaughterhouses or to areas outside of the city.

Eid this year will be celebrated in Moscow on 6 November.

Government officials say the ban on outdoor slaughter is already covered by existing legislation and comes under cruelty to animals laws. [. . .]

Now back to Florida:

SUNRISE, Fla. — Disturbed by the prospect of lambs and goats being slaughtered in her city, Sunrise Commissioner Sheila Alu single-handedly blocked a Muslim religious ceremony set to take place on Sunday.

“Yes, I was trying to stop it,” Alu said. “It’s shut down. I’m trying to protect innocent animals. This is not an appropriate setting for the slaughtering of animals in an open field in a city that’s as populated as Sunrise. Usually these religious ceremonies take place in a rural area.”

The news did not sit well with Nezar Hamze, executive director of the South Florida Council on American-Islamic Relations based in Pembroke Pines, Fla., a suburb 30 minutes northwest of Miami.

“Wow,” Hamze said. “That is very upsetting. We’ll find another venue. But that’s very disturbing. I’m very disappointed in that. We asked for permission and went through the proper channels and now it’s off because a commissioner has a problem with it.”

Muslims from local mosques had planned to gather at a 45-acre farm in Sunrise to celebrate the Eid ul-Adha, the Festival of Sacrifice, Hamze said. The holiday honors Abraham’s willingness to sacrifice his son, before God provided a sacrificial lamb instead.

The day also marks the end of the pilgrimage to Mecca that all Muslims are urged to make at least once in their lifetime.

“The meat is sacrificed according to state and Islamic law,” Hamze said. “There is no bloodbath. It’s very humane. It’s a slit on the throat real quick. And they bleed out in a couple seconds. The animals do not suffer.”

The Florida Humane Slaughter Act governs the handling and killing of livestock, and a 1993 U.S. Supreme Court decision stemming from a case in Miami-Dade County upheld the right for animal sacrifices for religious purposes. That decision grew out of a lawsuit filed by the Lukumi Babalu Aye church, charging that the city of Hialeah had acted illegally when it passed ordinances to black Santeria religious practices.

“If (Alu) was acting on her own, it becomes a question of politics rather than a legal argument,” Newton said. “If she called from her office and said she was commissioner so and so, that might be a problem.”

Alu said she called as a resident, not a commissioner.

“I have no ill will toward the Muslim faith,” she said. “I’m just an animal lover.”

After learning that there were no legal grounds for blocking the ceremony, Alu said she contacted a man who works for the owners to verify that they were allowing the ceremony. She said he told her they were not aware the event was taking place on their property and that the caretaker had improperly given permission for the ceremony.

“I don’t want to interfere with anyone’s religious beliefs, but if you want to slaughter animals it should be done in a slaughterhouse,” Alu said. She says she believes it is inhumane to slaughter the animals in a field. “They stab them in the throat. It’s horrible.”

“I’m not a vegetarian,” she said. “I just don’t agree with the inhumane treatment of animals. Looking at how they’re slaughtered brings tears to my eyes.”

But Hamze said their way of slaughtering the animals is more humane than a slaughterhouse. He says sometimes the slaughterhouse will use a hammer to kill the animal and it takes longer for it to die.

The property owners, Curtis and Marilyn Deem, did not answer a message left on their home phone. Derek Matherly, the property caretaker, ridiculed Alu’s concerns.

“I find it appalling that people are so upset when they eat lambs and goats every day,” he said. “Let’s go back a couple thousand years ago. They used to slaughter animals and then burn them for sacrifice. I don’t see the big story here. It’s not like animals are being tortured.”

Wednesday evening, Hamze said the caretaker called to cancel. The ceremony, however, will take place at a new, undisclosed location.

“We found another venue,” Hamze said, “but it will be kept private.”

He also said he had spoken with Alu.

“I truly believe she’s just a big animal lover,” he said, “and I don’t believe she meant any malice toward the Muslim community.”