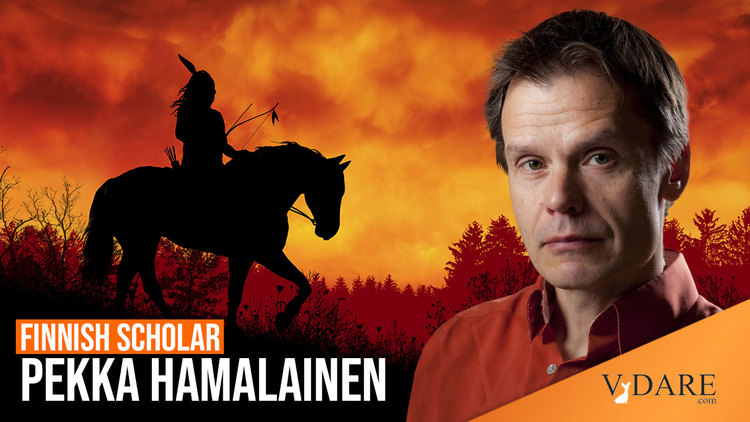 Finnish Scholar Takes The Indian Side In “Indigenous Continent: The Epic Contest For North America"

Earlier: A Historically Minded Reader Reminds Us That The Worst Massacres In American History Are Still Those Conducted By Indians—Without Guns

After a long period obsessing over African American history, a certain amount of attention is being reapplied to American Indian history, which is in a key way much more impressive: the Indians fought back for an incredible 275 years.

A Finnish Scholar Wants to Change How We See American History

Americans may know the story of Crazy Horse, the Lakota warrior who led the rout of United States Army forces at Little Bighorn, or of Chief Joseph, the Nez Percé leader whose eloquent protest against his people’s forced removal to a reservation still echoes today.

But how many know the story of Po’pay, the Pueblo religious leader who led a revolt that drove the Spanish out of New Mexico in 1680? Or Opeka, a Shawnee sachem who shrewdly negotiated with the governor of Pennsylvania in 1710 to spare the lives of his people accused of killing colonists?

Their stories are among the many that appear in “Indigenous Continent: The Epic Contest for North America,” a sweeping new book by the Finnish historian Pekka Hamalainen….

“Indigenous Continent,” published on Tuesday by Liveright, aims to do nothing less than recast the story of Native American — and American — history, portraying Indigenous people not as victims but as powerful actors who profoundly shaped the course of events.

Hamalainen, a professor at the University of Oxford who has written acclaimed histories of the Comanche and the Lakota, is hardly the first scholar to argue against the trope of the “doomed” Indian, who inevitably falls victim to the onslaught of guns, germs and capitalism. But he takes the argument further.

The confrontation between European settlers and Indigenous America, he writes, “was a four-centuries-long war,” in which “Indians won as often as not.”

I doubt if palefaces in the past underestimated how much trouble the Indians were to subdue. For example, the Coen Brothers are a surprisingly reliable guide to how white Americans thought in earlier eras, and the Indian attack on the 1873 wagon train in the climactic segment of their Western anthology The Ballad of Buster Scruggs is terrifying.

“Indigenous Continent,” which comes with endorsements from some leading historians, aims to be a paradigm-busting book in the vein of best-sellers like “The 1619 Project,” from The New York Times Magazine, and David Graeber and David Wengrow’s “The Dawn of Everything.: A New History of Humanity.”

And for many readers, he said, “the most surprising revelation will be that the seemingly decisive conquest of the continent was anything but.”

… And behind the book lies another fraught question: Who should write the story of Native America, and how?

Presumably, Oxford feels freer to let a white man with no claim to Indian blood specialize in American Indian history than most American universities would in 2022?

…In a review in The Wall Street Journal, the historian Kathleen DuVal questioned Hamalainen’s framing of Indigenous history as “a grand story about Native men fighting European-American men,” while saying little about the way Native actions were embedded in kinship networks maintained by women.