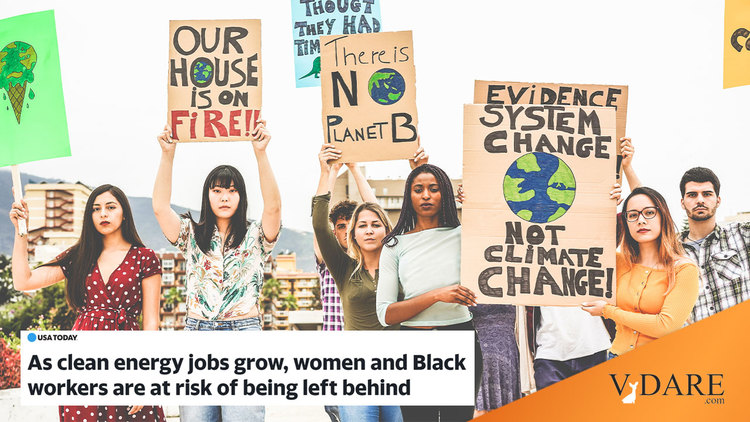 Fighting climate change via green energy is the most important thing in the world, except, of course, for hiring more black women to climb up hundreds of feet in the air to repair windmill turbines in the name of equity.

As clean energy jobs grow, women and Black workers are at risk of being left behind

Women and Black workers are vastly underrepresented in the clean energy workforce, an industry that pays higher-than-average wages and is the fastest-growing source of jobs in the U.S., according to a new report by a coalition of energy organizations.

Clean energy jobs, which range from creating electric cars to making buildings more energy efficient, are transforming the nation’s economy, but they are predominantly filled by white men, with Latino workers mostly stuck in entry-level positions and women and Black workers underrepresented in the industry overall, according to the report by a coalition of organizations including the Alliance to Save Energy and the American Association of Blacks in Energy.

Meanwhile, Black workers have the biggest gap of any racial group between their representation in clean energy jobs and their numbers in the broader U.S. workforce, the report says. They make up roughly 8% of clean energy employees, though they are about 13% of U.S. workers overall.

Latino employees make up almost 17% of clean energy workers, just slightly below the 18% of jobs they hold in the broader U.S. workforce. But they tend to be concentrated in entry-level construction positions, “jobs that are some of the first to get cut when things get bad,” Keefe says. …

“What we’re seeing in clean energy is not a lot different from what we saw in the tech industry that is still overwhelmingly run and populated by men,” Keefe says. …

In a case study, the diversity report released Thursday focused on the role of technicians who install and fix wind turbines, the key component to generating energy with wind.

Install and fix wind turbines presumably means that a job requirement is lack of disabling fear of heights.

With more than 60,000 turbines in 41 states and two territories, wind power is a surging part of the economy, and senior technicians earn almost $40 an hour. But Black employees and women each comprise just 5% of that workforce, according to the report. Seven in 10 turbine technicians are white, and 2 in 10 are Latino.

Blacks and women and, likely, especially black women tend to not like the risk of death by falling and thus shy away from jobs involving climbing up poles to fix things.

Presumably, the wind turbine industry will eventually stumble upon the ideal solution: don’t hire black women to repair turbines, instead hire them to manage the white and Latino and American Indian men who actually repair the turbines. The black women can stand around on the ground at the bottom of the windmills and tell the men to climb. Or, ideally, the black women can sit around indoors at the main office and tell the men to climb via Slack.

Stereotypes about fear of heights have not always gone against nonwhites. For example, during the 1920s skyscraper boom in Manhattan, the most admired ethnicity for high iron jobs were Mohawk Indians from upstate. They were often said to lack the instinct to fear falling.

But, eventually, old Mohawk iron workers revealed that they really were scared of dying by falling off I-beams hundreds of feet high just like everybody else.

But, because they really liked getting these high-paid, high-prestige jobs, they just didn’t tell anybody about their fears.