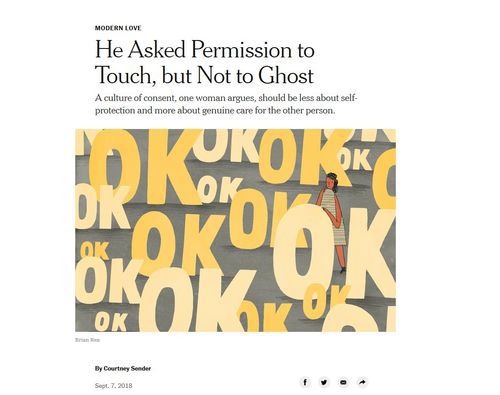 Feminism: "He Asked Permission to Touch, But Not to Ghost"

He Asked Permission to Touch, but Not to Ghost

A culture of consent, one woman argues, should be less about self-protection and more about genuine care for the other person.

Summary: 30 year old woman invites 24-year-old guy she sees on Tinder over to her apartment. Sleeps with him immediately. She is impressed he asks permission for every step of the process, like an Antioch College RA in 1994. He comes round once more for sex, then disappears. She feels hurt, despite all the permissions she gave. She decides our Society must change so that guys don’t love her and leave her so fast.

And if that’s the goal, then consent doesn’t work if we relegate it exclusively to the sexual realm. Our bodies are only one part of the complex constellation of who we are. To base our culture of consent on the body alone is to expect that caretaking involves only the physical.

I wish we could view consent as something that’s less about caution and more about care for the other person, the entire person, both during an encounter and after, when we’re often at our most vulnerable.

Because I don’t think many of us would say yes to the question “Is it O.K. if I act like I care about you and then disappear?”

Courtney Sender is a writer in Boston.

I think a lot of people these days would like to bring back Victorian mores.

When I was a kid, there was a lot of emphasis on how crazy the prudish Victorians were and how much harm they did to human happiness by limiting sex.

But the Victorians had their reasons.

Also by Courtney Sender, in a blog called AGNI:

Against “Unlikeable”: On the Occasion of What Happened

ON SEPTEMBER 18, 2017 BY AGNIMAGIN ESSAYS
by Courtney Sender

When my novel manuscript was rejected in early 2016, I knew that Hillary Clinton would lose the election.