Facing The Reality Of Homicide In Africa And The African Diaspora

McWhorter accepts that blacks are more violent, but insists it’s welfare, drugs, fatherlessness, etc. The part about IQ, though, “is tough reading.” Instead of attacking Murray’s data he writes: "I suspect, in my gut, that the issue is cultural..."

One Twitter user tweeted "Nope" and added this chart: 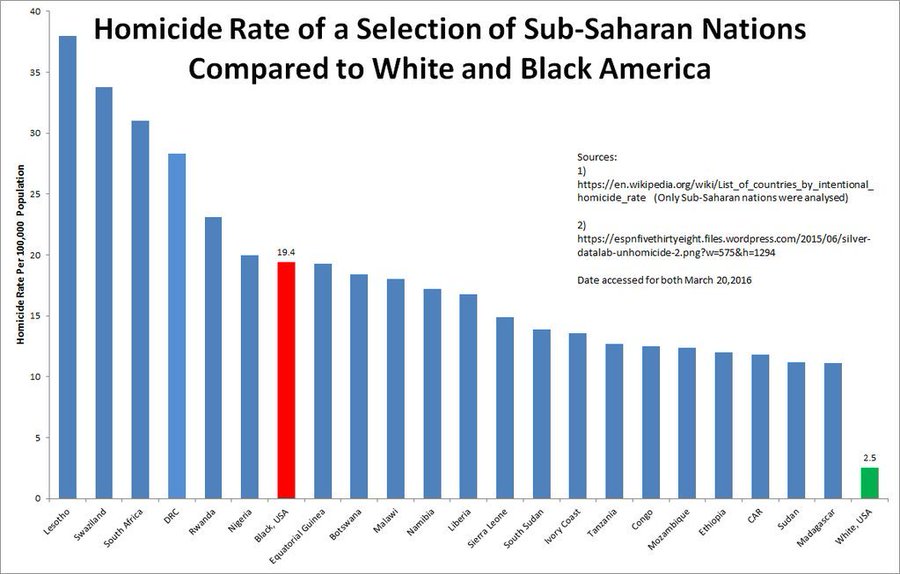 This chart was created during the 2016 Trump campaign possibly by someone on the now-banned Reddit channel r/the_donald, banned for supporting the then-President.

The sources are Wikipedia's List of countries by intentional homicide rate and a chart from Black Americans Are Killed At 12 Times The Rate Of People In Other Developed Countries, by Nate Silver, FiveThirtyEight, June 18, 2015.

Nate Silver, of course, compares the U.S. black and white homicides to those of "developed" non-African countries with non-black populations,  and he was only willing to discuss it because he was thinking of the black murder rate as affecting black murder victims, in the aftermath of the extremely rare, nationally famous white-on-black crime committed by Dylann Roof in Charleston.

Here's a different chart, from the BBC at the time of the World Cup in South Africa in 2010:

That's absolute numbers, not per hundred thousand, but South Africa has a smaller population than Great Britain. It's just that South Africans, mostly blacks, commit a lot more murders.

This is also true of the black diaspora countries in the Caribbean, like Haiti and Jamaica—not affected by US black culture, but much more murderous than the U.S.

I can agree with both Steve Sailer and John McWhorter in saying that black culture could be improved, and the murder rate brought down. (Sailer describes his position as "anti-murderist.") But even if black culture got a lot better, murder would still have a "disparate impact."