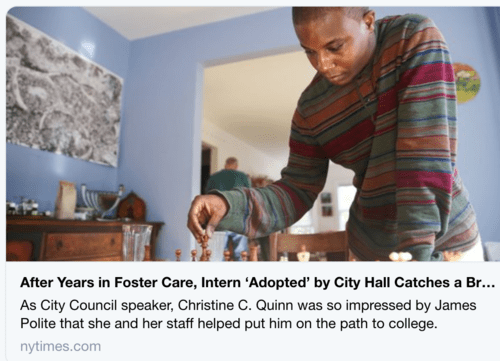 The national media has been full of stories today about the discovery of anti-Semitic graffiti at a liberal Brooklyn synagogue last evening. Well, new information has now come to light …

First, though, from the New York Times last year:

After Years in Foster Care, Intern ‘Adopted’ by City Hall Catches a Break

James Polite, 25, at his foster parents’ home in Brooklyn.

James Polite spent much of his childhood in foster care.

In high school alone, Mr. Polite estimates, he was placed in 10 different homes. And he received little encouragement from social workers to go to college.

But Mr. Polite, now 25, still believed that college was the best next step. He found encouragement as a volunteer in his teens, registering voters and canvassing neighborhoods in New York City during Barack Obama’s first presidential bid. Mentors on the campaign trail urged him to pursue higher education.

In 2008, at a gay pride rally for Mr. Obama, Mr. Polite met Christine C. Quinn, then the City Council speaker.

Ms. Quinn still remembers their introduction on the steps of City Hall. “James was telling me his story,” she recalled recently in an interview. “And I said, ‘Do you have an internship?’ And he said ‘No.’ And I said, ‘Well, you do now.’”

He interned with Ms. Quinn, a Manhattan Democrat, for several years, working on initiatives to combat hate crime, sexual assault and domestic violence. He also took part in her re-election campaign in 2009 and returned to help with her unsuccessful bid for mayor in 2013.

“James was the adopted child of the Quinn administration,” she said. “And it wasn’t just me. It was the entire City Council staff.”

Ms. Quinn wrote Mr. Polite a letter of recommendation to Brandeis University in Waltham, Mass., and followed up with a call to its president. Council staff members even drove him there on move-in day.

… But as he got older, Mr. Polite, who says he identifies as queer and does not base attraction on gender, said he felt misunderstood at home. …

After graduating from high school, Mr. Polite enrolled in a preparatory year at Brandeis. … Months before that birthday, a Brooklyn couple learned about the possibility of fostering him. The couple, Josh Waletzky and Jenny Levison, said they had wanted to foster an “L.G.B.T.Q. youth” on the brink of aging out of the system. Children’s Aid, one of the eight beneficiary organizations of The New York Times Neediest Cases Fund, took over Mr. Polite’s case in early 2013 and facilitated the placement. Although Mr. Polite was not legally adopted — his relationship with his biological parents has improved in recent years — Ms. Levison called it a “moral adoption.” He says he considers the couple his second set of parents. …

Despite the assistance, Mr. Polite struggled at Brandeis. Smoking marijuana, he said, became a coping mechanism to manage his stress…. During treatment, he learned he had bipolar disorder, for which he is now medicated.

… Mr. Polite hopes to graduate in May with degrees in African-American studies and political science, and took two classes over the summer to stay on pace. In June, Children’s Aid used $856 from the Neediest Cases Fund for school supplies and fees not covered by his financial aid package. …

Correction: December 15, 2017
Because of an editing error, an earlier version of this article referred incompletely to the type of youth whom Josh Waletzky and Jenny Levison sought to foster. It was an “L.G.B.T.Q. youth” on the brink of aging out of the system, not merely a gay youth.

Donations to the Neediest Cases may also be made with a check or over the phone.

And from the New York Daily News this evening on that anti-Semitic graffiti incident at the Brooklyn synagogue:

A vandal who scrawled anti-Semitic graffiti in a Brooklyn synagogue and set fires around several other Jewish places of worship was arrested Friday, police sources said.

Cops committed James Polite, 26 of Bedford-Stuyvesant to the psychiatric ward at Woodhull Hospital in Brooklyn. He is charged with criminal mischief as a hate crime and making graffiti, cops said.

The suspect was busted in the same clothes he wore in surveillance video of his vandalism at the historic Union Temple in Prospect Heights. Polite is also suspected of setting a series of small trash fires in and around synagogues in Williamsburg, police sources said.

An employee at the historic synagogue, on Eastern Parkway, found “Hitler,” “Jews better be ready” and “Die Jew rats, we are here!” written in black marker in the hallways and stairwells of the first, third and fourth floors on Thursday night, police said. …

There were also drawings of the Puerto Rican flag and the words “Free PR,” cops said.

Union Temple’s rabbi said the vandalism left him and his congregation more intent on carrying on their good works.

“We are committed, more resolved than ever to continue with our mission, and when I say ‘our mission,’ I mean our mission: love, hope, diversity, tolerance, amity, equity, community, understanding,” Rabbi Mark Sameth said. “That’s what we’re all about.”

“It’s coming at a time when Jewish New Yorkers are feeling a profound sense of loss and sadness because of what happened in Pittsburgh at the Tree of Life Synagogue and all those who were killed there because of their faith,” de Blasio said.

The discovery of the hate speech was so alarming that an event scheduled at the synagogue by “Broad City” star Ilana Glazer was canceled. …

Cops released a surveillance image of the vandal on Friday. He is described as a black man, about 20 years old, 5-foot-8, 140 pounds with black hair.

So the arrested suspect is a black, gay, Democratic activist.

They just ain’t making neo-Nazis like they used to …

Here’s a question: if this case were ripped from the headlines to furnish the basis for a Law & Order episode, what changes would the writers make? Here’s one suggestion:

James Polite vaguely reminds me of another New York City character, the Hug Thug, Jermaine Himmelstein, who panhandled for years in Times Square with a sign offering “Free Hugs.” But when girls turned him down, he’d punched them in the face.