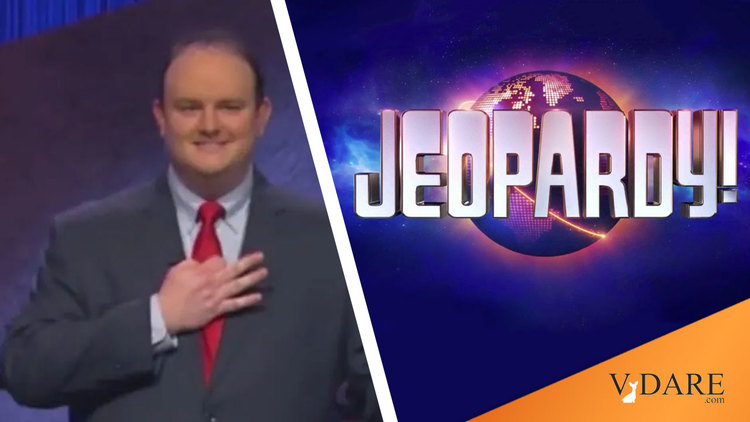 As I’ve been pointing out for quite a few years, the United States is undergoing a revival of superstition and witch-hunting in the name of Anti-Racism. Millions of modern Americans are deeply concerned that a vast secret coterie of White Supremacist Terrorists are signaling to each other on your favorite TV shows.

For example, from Entertainment Weekly:

When he was introduced as a three time winner, he held up three fingers to acknowledge his three victories, just as the day before he’d held up two fingers and the day before that, one finger.

that has become associated with white supremacist hate groups, and, in another instance, responded to a clue with a term that is considered a slur.

He apparently answered “Who are the Gypsies?”

In an open letter published to Medium on Wednesday, the group writes, “A recent contestant has caused concern among Jeopardy! viewers for two separate occurrences, and we as former contestants feel the need to speak out against the messaging that these choices communicated — either intentionally or unintentionally — by the contestant Kelly Donohue and, implicitly by association, the producers of Jeopardy!”

On Tuesday’s episode, Donohue made a hand gesture during his on-camera introduction that he later said on social media signified the number three, as he was the three-day champion. In his previous episodes, he gestured with one finger and two fingers in accordance with the number of games he’d won.

But some viewers were struck by Donohue’s specific finger positions, which, according to the open letter, “whether intentional or not, resembled very closely a gesture that has been coopted by white power groups, alt right groups, and an anti-government group that calls itself the Three Percenters.” (According to the Anti-Defamation League, the “‘okay’ hand gesture” began as a hoax but has been used by right-wing trolls and white supremacists.)

The open letter calls on Donohue to publicly apologize “for the ramifications of the gesture he made” and disavow “any connection to white supremacist doctrines,” and urges the show to “address Kelly’s behavior” and take measures to ensure that “future mistakes of this magnitude never make it on air.”

In a since-deleted Facebook post addressing the blowback, Donohue said he just wanted to “count my victories.”

“Many of the great champions of old had a little signature hello they would do on-screen when being introduced by Johnny Gilbert,” he wrote. “I decided to count my victories. That’s a 1. That’s a 2. That’s a 3. No more. No less. There wasn’t a hidden agenda or any malice behind it. Had I managed to repeat as champion, you’d have been treated to a 4.” …

The letter also notes that during Monday’s episode, Donohue responded to a clue with a term for the Roma people that is considered a slur. Although guest host Anderson Cooper noted as much on air, the signatories point out that “other episodes of the show where questionable responses or misspeaking prompted a pause and re-recording of the dialogue.”

They continue, “This probably would have been a good occasion to employ a similar fix. Yes, it may be an innocent or ignorant reply, and yes, it was technically correct.

But if we don’t exterminate usage of “Gypsy” today, how can we cancel people for using “Roma” tomorrow?

But on a television show for an international audience, the impact on a larger stage needs to be taken into account.”

Thus, the former contestants are asking that the writers “remove this word from their vocabulary when it’s not being used in the context of a title of an artwork or a direct quotation.”

With regard to Donohue’s hand gesture, the letter also notes that the Jeopardy production team has in the past taken measures to reshoot or even digitally alter moments deemed unsuitable for broadcast.