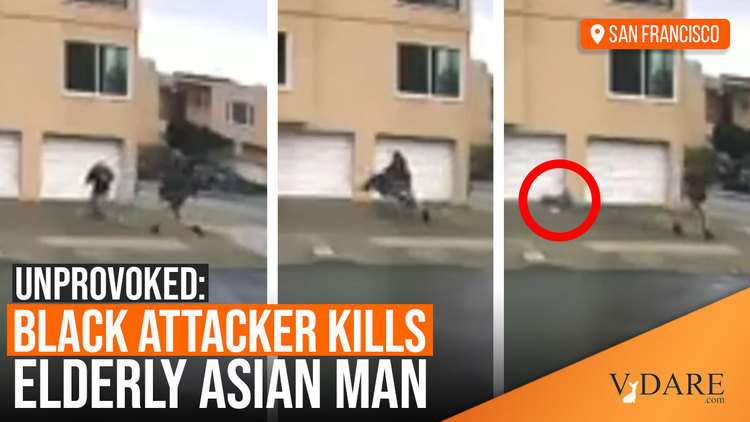 Everything Bad That Blacks Do, Like Knock Over Old Asians, Will be Blamed On Trump and/or Covid Forever

The attacks have renewed fears over a wave of anti-Asian violence and harassment that was spurred earlier in the pandemic.

The videos are graphic and shocking.

In January, a local television station showed footage of a young man sprinting toward, then violently shoving to the ground, a man identified as Vicha Ratanapakdee, 84, who had been out for a morning walk in the Anza Vista neighborhood of San Francisco. He later died.

Another video shows a 91-year-old man in Oakland’s Chinatown neighborhood being pushed facedown into the sidewalk cement from behind in an apparently unprovoked attack.

If you actually watch the videos, you’ll see that both elderly Asians were knocked down by sainted Blacks, but I, Jill Cowan, am not going to mention that discordant fact to the NYT’s 7 million subscribers. What am I, crazy?

The attacks quickly reinvigorated simmering outrage, fear and hurt over a wave of anti-Asian violence and harassment that community leaders say was spurred earlier in the pandemic by the rhetoric of former President Donald J. Trump, who insisted on calling the coronavirus “the China virus” or the “Kung Flu.”...

Articles and Instagram slide shows using a now-familiar palette of pastels and bold lettering have since proliferated, sounding alarms about rising anti-Asian violence with jarring statistics and calls to confront racism against Asians with the urgency that has animated wide support for the Black Lives Matter movement.

You’ll notice that I, Jill Cowan, didn’t actually say that whites attacked these two Asians. In the dark night of my soul, I’m not quite that evil. So I just implied it. That’s okay, isn’t it?