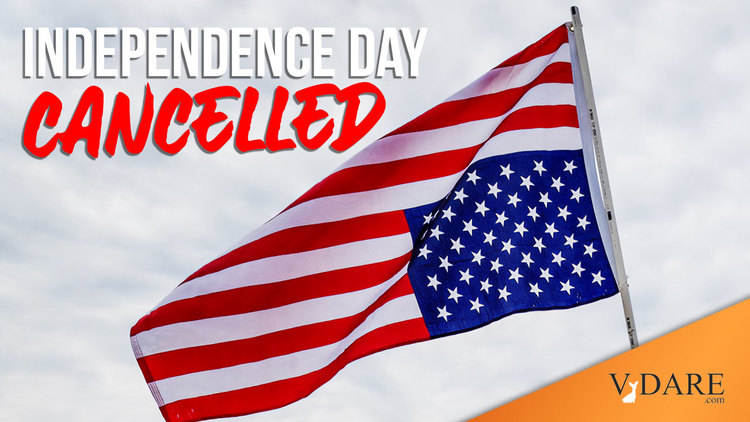 “Perhaps it's fate that today is the 4th of July, and you will once again be fighting for our freedom, not from tyranny, oppression, or persecution — but from annihilation. We’re fighting for our right to live, to exist….” – Independence Day, 1996

Once we understand this, all that’s happening will make sense.

4th Of July Parade Canceled, But Juneteenth And Pride Parades Are On In Evanston, Fox News, June 19, 2021

The city of Evanston, Illinois is under fire this week after an email blast was sent out notifying residents that their Fourth of July parade has been canceled and will be a virtual event, but the Juneteenth and Pride parades were still on.

On Saturday, the city hosted its Juneteenth parade. The celebrations began at 11 a.m. with a parade led by Grand Marshals Cheryl Judice and Jason Powell. The parade went on from the parking lot of the Robert Crown Community Center and proceeded up Dodge Avenue to Simpson Street.

Next week, the city will host a Pride parade on Saturday that includes a parade, an all-day celebration, and a memorial candle lighting ceremony.

“The Evanston Fourth of July Association has decided to cancel its fun run, parade, band performance, and lakefront fireworks show for Independence Day this year. Join the Association for a safe, creative, virtual celebration instead! Tune in on Sun., July 4 to enjoy the broadcast,” the city notified residents. The parade is hosted by the association and not the city.

COVID-19 was cited as a reason for the cancelation, “Based on concern for public health due to the unpredictability of the pandemic’s impact, vaccination rates, and in cooperation with our local authorities, the Trustees of the Evanston Fourth of July Association voted to cancel the Fun Run, Parade, Palatine Concert Band performance and Lakefront Fireworks show on July 4, 2021.”

The city has not have a positive COVID-19 case since June 11th and for the past two months average less than 3 cases per day. 75% of the city’s residents are now fully vaccinated. 86% of the city has had at least their first dose of the vaccine, putting them 22% above the national average in both categories.

The promotion of all “holidays” (Juneteenth being explicitly anti-white) above July 4th and Independence Day, coupled with the demonization of white people on every day ending with a “y” represent all you need to know about the revolution happening in 2021 America.

We are fighting for our right to exist.

It should be noted Evanston is the first city in America to have elected officials to vote for reparations for blacks...